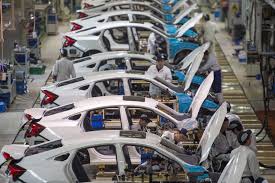 China's auto sales returned to double-digit growth in January due to a low base, data from an industry association showed Friday. About 2.8 million vehicles were sold in January, up 11.6 percent year on year, according to the China Association of Automobile Manufacturers (CAAM). The growth was faster than the increase of 0.1 percent in December and 3 percent in 2017. The CAAM attributed the surge to a relatively low base in the same period last year, noting that sales were down 8.2 percent from the previous month. China's auto sales increased 13.7 percent in 2016, but the market was under pressure last year from government policy adjustments such as sales tax hikes. In October 2015, the government slashed the sales tax on cars with engines of 1.6 liters or below from 10 percent to 5 percent to boost auto sales. The tax was raised to 7.5 percent in 2017 and then returned to 10 percent again in 2018. New energy vehicle (NEV) sales were strong in January, soaring 430 percent year-on-year to reach about 38,000 vehicles, according to CAAM. The robust growth came as China intensified efforts to encourage the use of NEVs to ease pressure on the environment, by offering tax exemptions and discounts for car purchases, and ordering government organizations to buy more new energy vehicles. China remained the world's largest auto market in 2017, with some 28.88 million vehicles sold, according to CAAM. In January, some 2.7 million vehicles were produced, up 13.6 percent year-on-year but down 11.6 percent month-on-month. About 79,000 vehicles were exported, up 36.3 percent from a year earlier, according to the CAAM. China is aiming to become a leading auto-maker within a decade by making breakthroughs in key technologies and markedly increasing the share of Chinese brands in the international auto market. The government expects new energy vehicle output and sales to hit 2 million annually by 2020, and overall auto output to reach around 30 million by 2020 and 35 million by 2025, according to a plan released last year.