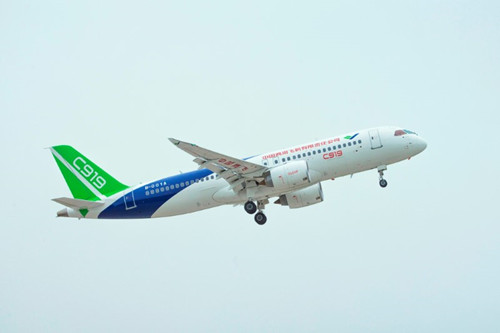 Shanghai-- China's self-developed C919 passenger jet completed its first long-distance flight on Friday, in a milestone that its manufacturer said marks the plane's move into an airworthiness certification phase.

The jet, which China wants to compete with Boeing Co's 737 and the Airbus SE A320, is a symbol of China's civil aerospace ambitions. It will remain in Xi'an to undergo further testing, the planemaker said.

"This ferry flight indicates that the C919 possess the ability to fly inter-city routes," COMAC said in the statement. "(It) marks the move into research and development flight-testing and airworthiness certification work."

The latest flight is the plane's sixth test since it flew for the first time on May 5. Analysts had questioned the long time gaps between previous test flights.

COMAC is aiming to obtain certification for the plane from Chinese regulators as well as Europe's aviation safety regulator, which in April agreed to start the certification process.

COMAC said it planned to eventually test six C919 planes and will carry out the first flight for its second jet by the end of this year. The plane currently has 27 customers who have placed orders and commitments for 730 jets, it added.