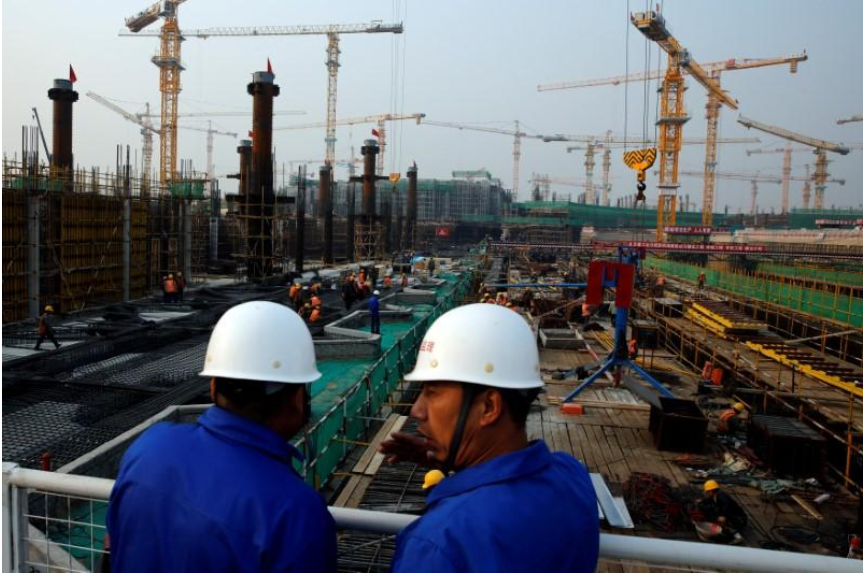 China’s economy will likely grow 6.8 percent in 2017, topping the state target and accelerating for the first time in seven years, a Reuters poll showed, as Beijing walks a tightrope by containing debt and property risks without stunting economic growth.

Still, growth in the world’s second-largest economy is projected to slow to 6.4 percent in 2018, the Reuters poll of more than 65 economists showed, as the property curbs and efforts to deal with debt risks are expected to gain more traction.

China’s property investment and construction are seen slowing as more cities try to curb surging housing prices, while a government campaign against riskier lending pushes up borrowing costs and a crackdown on pollution hurts some factories.

Chinese economic growth in the fourth quarter of 2017 is expected to cool to 6.7 percent from a year earlier, but the full-year growth is expected at 6.8 percent, according to the poll.

China’s annual economic growth rate eased to 6.8 percent in July-September from 6.9 percent in the second quarter as the property sector cooled while a government campaign against riskier lending pushes up borrowing costs.

“As overall GDP growth still remains above the government’s target of ‘around 6.5 percent’, we expect policy makers to maintain a tightening bias,” analysts at Bank of America Merrill Lynch said in a note.

“Looking ahead, we expect to see weaker growth, mainly on the investment front, as the impact of tighter financial conditions start to emerge.”

The forecasts for this year and in 2018 were both more optimistic than the polling results in July.

China’s economy has defied expectations of a marked slowdown this year due to a improving global demand for its goods, sustained state infrastructure spending and stronger corporate earnings boosted by soaring factory price rises, analysts said.

In the opening speech of a key, twice-a-decade Communist Party Congress this week, President Xi Jinping said China will deepen economic and financial reforms and further open its markets to foreign investors as it looks to move from high-speed to high-quality growth.

Analysts are looking to the annual Central Economic Work Conference, which is usually held in December, for signals on the 2018 growth target and policy initiatives.

Bank of America Merrill Lynch expects China to keep its annual growth target at around 6.5 percent in 2018.

Analysts believe the PBOC will keep benchmark lending rates unchanged at 4.35 percent through at least the second quarter of 2019, the Reuters poll showed.

They have pushed back their expectations on a cut in the amount of cash that banks are required hold as reserves, or the reserve requirement ratio (RRR).

The central bank is expected to cut the RRR for all banks by 50 basis points (bps) in the second quarter of 2018 to 16.5 percent, versus the July poll’s prediction for the 50 bps cut in the first quarter of next year.

In late September, the central bank cut the amount of cash that some banks must hold as reserves (RRR) for the first time since February 2016. The move, effective in January, offers an earnings boost to banks if they lend more to struggling smaller firms and the private sector.

Analysts expect annual consumer inflation to be more muted at 1.6 percent in 2017, down from last year’s 2 percent due to weak food inflation. But the rate could pick up to 2.2 percent in 2018, the poll showed.