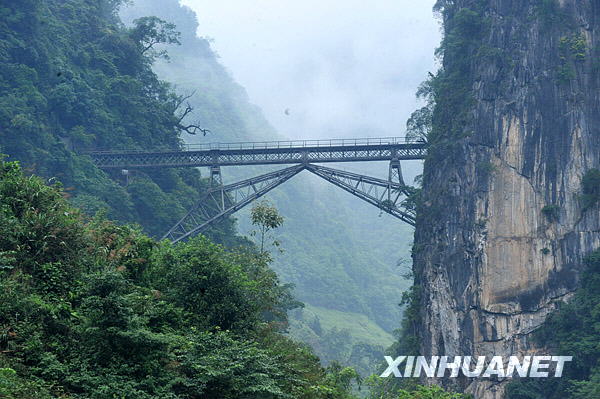 Firstly built in the end of the Ming Dynasty, the bridge is known as the No. 1 Bridge of the Yunnan-Vietnam Railway.

A pair of freight trains began operation on a meter-gage railway line connecting Kaiyuan in southwest China's Yunnan and Haiphong, Vietnam Monday. The train departing Kaiyuan was loaded with 496 tonnes of fertilizer, and its partner in the opposite direction carried 496 tonnes of sulphur from Vietnam, according to the railway bureau in Kunming, the provincial capital of Yunnan. The 18-carriage freight trains will run on a regular daily schedule, with an estimated transportation volume of 650,000 tonnes a year. The railway line was launched in 1910 and has been in use for passenger services and occasionally freight over 100 years. The new service is China's first scheduled international meter-gage freight railway service. "The service will slash the transportation time by a quarter and costs by 10 percent," said a spokesperson for Yunnan Yuntianhua, adding that the company will use the train to export 350,000 tonnes of fertilizer and import 300,000 tonnes of sulphur a year.