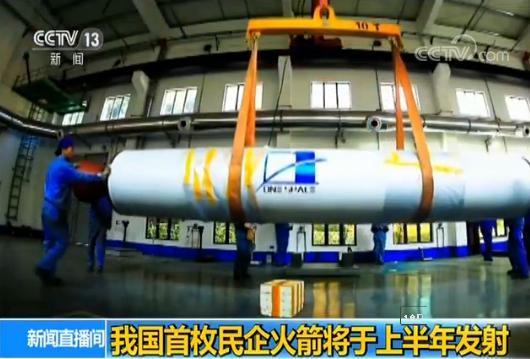 The 8-meter-long rocket, with a 6-meter solid propellant rocket engine which can generate a thrust of 35 tonnes, is expected to be launched in the first half of 2018. (Photo: China Central Television)

China is set to launch the first privately-manufactured rocket in the first half of 2018, China Central Television reported.

The 8-meter-long mini rocket, with a 6-meter solid propellant rocket engine which can generate a thrust of 35 tonnes, is less than half the size of the recently launched Long March 11 which was developed by China's state-owned China Academy of Launch Vehicle Technology. It can carry a 100 kg satellite and send it to an altitude of 800 km. Testing of the engine was completed at the end of 2017.

"Sophisticated programs like deep space exploration are for China's national rocket development team; as a private company, we focus more on commercial development, namely, the efficiency and cost," said Shu Chang, founder of the company set to launch the rocket.

By cooperating with military enterprises, such as China North Industries Group and China Aerospace and Industry, the company has developed cost-effective and highly-reliable carrier rocket, proving that it is technically feasible.

Currently, there're at least five private rocket development companies in China, and Shu's is the first to make a launch announcement. Facing strong opponents worldwide, such as Space Exploration Technologies Corp, Shu gave his viewpoints. "There is the gap in comparison with world's leading private companies. Pursuing diversified development and focusing on cost and effectiveness might remain the best choice to open the market."

China specified in the white paper "China's Space Activities in 2016": it will encourage private capital and social sectors to engage in its space activities.