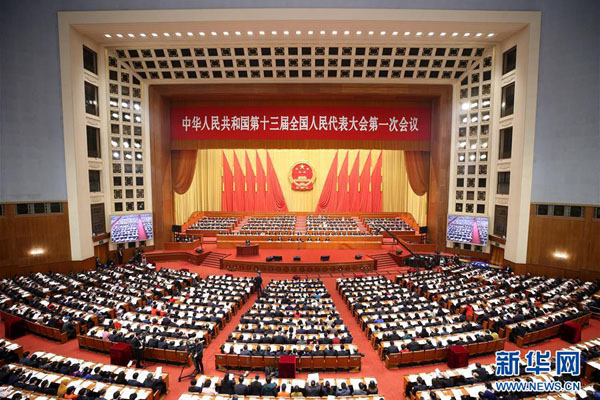 Approved at a plenary meeting of the ongoing first session of the 13th National People's Congress (NPC), the plan will create an immigration administration, an agency to coordinate foreign aid, a combined banking and insurance regulator, and ministries of veterans affairs, emergency management and natural resources, among others.

According to Wang, the cabinet will have fewer entities at ministerial and vice-ministerial levels.

"It focuses on the needs of development and meets the people's expectations," he said.

The move is seen as a continuation of the previous seven rounds of cabinet restructuring since the early 1980s.

The latest restructuring is considered part of a broader plan of the Communist Party of China to deepen reform of the Party and state institutions.

"The reform comes at a crucial time," Chen Xi, a senior Party official, said in an article recently published in the People's Daily.

It will support the efforts in the next three years in building a moderately prosperous society and lay a foundation for building a great modern socialist country by the middle of the century, Chen said.

According to the cabinet restructuring plan, the country's banking and insurance regulators will be merged into one commission to help prevent and dissolve financial risks, and protect consumers' rights in financial products.

Wang Honghai, an NPC deputy and Party chief of Ninghe District of Tianjin Municipality, said the new ministries would help consolidate responsibilities related to environmental protection. "The government unites efforts to win the battle against pollution."

A ministry of veterans affairs, a state medical insurance administration and a state immigration administration will also be formed, aimed at offering services towards particular groups.

Zhang Hongxing, an NPC deputy and mayor of Fuzhou City, Jiangxi Province, said the reform was people-oriented with targeted management so that more people could enjoy quality and convenient public services.

In a move to boost Chinese culture, the cabinet will merge the Ministry of Culture with the National Tourism Administration while a state radio and television administration will be formed.

Another highly-watched move is the forming of an international development cooperation agency, which will assume duties related to foreign aid now scattered in the Ministry of Foreign Affairs and the Ministry of Commerce.

"Fragmented management has increased aid costs and coordination difficulties among different departments, and a consolidated entity will help solve the fragmentation problems related to foreign aid," said Li Xiaoyun, a professor with the China Agricultural University.