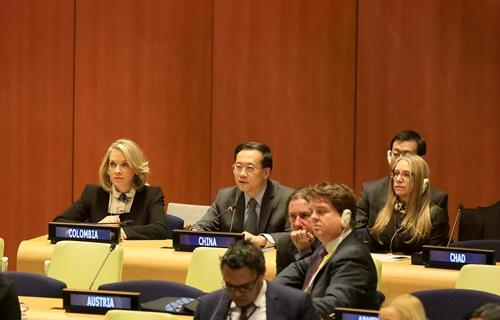 New York (People's Daily) - Newly appointed ambassador of the Chinese Permanent Mission to the United Nations, Ma Zhaoxu, said during a recent General Assembly meeting at UN headquarters in New York that Security Council reform is a complex and systemic endeavor that involves the vital interests of all members and long-term UN development.

“It should be a democratic, consultative, transparent and an inclusive process with a commitment to continuously build mutual trust and foster consensus,” said Ma.

“There are five categories, such as membership, veto power, regional representation, size and working methods of an enlarged Council, and its relationship with the General Assembly, as they form an integral whole of interconnectivity and interdependence.

“We should take a holistic approach to Security Council reform and seek a package solution. Any attempt at a step-by-step or piecemeal approach will impair the nature of the reform and hinder achieving the ultimate goal, and will not be acceptable to all of the members,” said Ma as he laid out his agenda.

Member states know how important any negotiation process is and have actively took part whenever necessary. Nations have also engaged in candidexchanges of views, acquiring a better understanding of each other’s positions and concerns, which helps maintain reform.

The intergovernmental negotiation process has its twists and turns, but has also produced constructive practices.

Relevant experience and lessons merit reflection by member states and practicehas shown that respecting the ownership of member states is a fundamental prerequisite to smooth negotiations.

Any view, idea, or proposal by member states regarding Security Council reform are fundamental components of negotiations and must be respected.

Imposing superficial reform deadlines and proposals or starting text-based negotiations at inappropriate times will undermine credibility and function as a disservice to member state unity.

Ma pointed out how UN membershiphas risenfrom 51 to 193 official states in 70-plus years. Most of the members are developing countries, and African nations account for more than 25 percent of total UN membership.

The rise of developing countries as a whole and the ascending power and influence of African states are prominent features of international relations in today’s world.

Ma said, “Security Council reform should reflect this reality by giving developing countries more representation, and especially so among nations on the African continent. These countries are in need of support to rectify historical injustices while reflecting the will of regional countries in the decision-making processes of the Security Council and will enable small-and-medium-sized countries to play a bigger role in maintaining international peace and security.”

Ma, a veteran diplomat with decades of experience, reiterated that China has always supported rational and necessary Security Council reform.  Such changes enhance authority and efficiency which then allow them to help fulfill responsibilities bestowed to them by the UN Charter.

“China hopes that at this session of the intergovernmental negotiations, member states will have extensive, in-depth and democratic consultations on the five clusters in an open, transparent and inclusive manner, and further mutual understanding and trust so as to create conditions for reaching a package solution and the broadest possible consensus. China stands ready to work with all parties to push Security Council reform in a direction that would serve the common interest of the whole membership and the long-term interest of the United Nations,” concluded Ma.