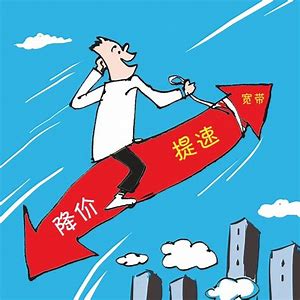 Beijing (People's Daily) - The cost of broadband and cellular packages in China has declined for six years in a row, with the broadband fee in 2017 down 18.2% and cellular by a stunning one half, according to a report on domestic consumption for 2017 issued by the National Development and Reform Commission (NDRC) on Friday.

Globally, China's telecom charges stand below the world average, with broadband ranking 89 out of a total 182 and cellular packages 53 out of 178, according to the International Telecom Union (ITU).

More than that, it's expected to be much cheaper and convenient to surf online, as Chinese Premier Li Keqiang pledged in the 2018 government working report to further cut cellular charges by more than 30%, end data roaming fees and extend high-speed network coverage to rural areas.

The government's efforts to push down telecom charges, starting in 2014, have succeeded, statistically at least. During the period, average data costs dropped by 70% from 100 yuan to 26 yuan per gigabyte. The per capita data rose from less than 300 MB to for now over 2 GB, and keeps growing.

Yet the huge numeral margin, in the public eyes, was not felt so strongly. Some groaned and lampooned telecom operators' astute strategies that despite surface lower fees, users have to pay otherwise.

The gap exists because methodology behind the reduction of data charges differs, said Liu Liwen, a researcher from the China Academy of Information and Communications Technology.

Consumers who expect to spend less may end up with paying more on phone bills. This is because they have no choice but to take more expensive data packages, as operators upgrade their packages with larger data volume and higher connection speed but at the cost of dropping the low-end packages, a perfect balance between keeping profitable and fulfilling promises.

Roaming data charges also hurt satisfaction of users who are offered low-cost or even free local data packets, but will be lavishly charged elsewhere. That is why people applaud the proposal Premier Li made to cancel the roaming expenditure by 2018.

It took more than a decade to upgrade cellular speed to GB-levels from a byte-sized base, so should cost reduction, since the mechanics of which involve more cumbersome reforms than technological innovations.