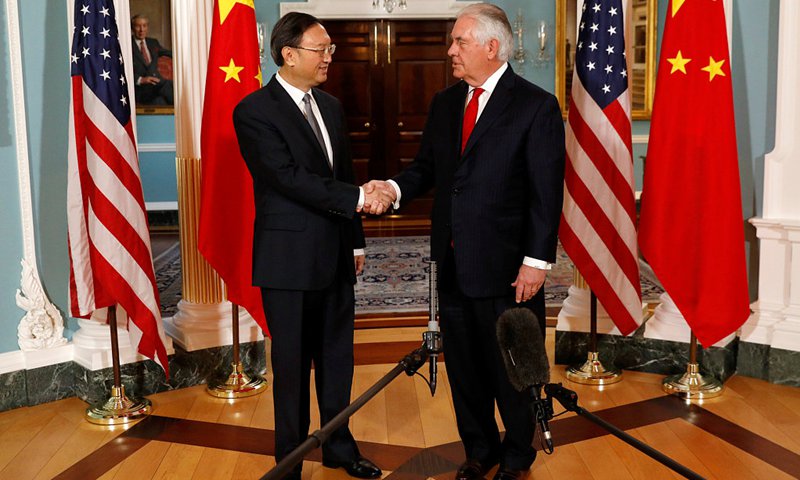 The visit of China's top diplomat to the US reflects China's concerns over the escalation of Sino-US friction on trade and the current situation on the Korean Peninsula, and shows China is actively safeguarding bilateral ties under the circumstances, experts said.Chinese State Councilor Yang Jiechi's visit has allowed the two sides to discuss bilateral ties and important international and regional issues of mutual concern, said foreign ministry spokesperson Lu Kang, who accompanied Yang in Washington DC on Saturday, the Xinhua News Agency reported.Yang said during meetings with US officials that China and the US could properly address bilateral trade through the two-way opening of markets, and "make a bigger cake of cooperation," the report said. Yang visited the US from Thursday to Friday, and met US President Donald Trump on Friday.Trade negotiations and pushing forward Sino-US relations topped Yang's agenda, Wu Xinbo, director of Fudan University's Center for American Studies in Shanghai, told the Global Times on Sunday. Yang's visit reflects China's concerns over a possible trade war with the US after Washington recently increased pressure on Beijing, said Shi Yinhong, director of the Center for American Studies at Renmin University of China.He noted that this also shows China is actively pushing forward bilateral ties. During Yang's visit, the US agreed that China-US trade ties are significant, saying it is willing to work with China to fortify and seek to solve bilateral economic and trade issues in a more effective manner, Xinhua reported.However, the Trump administration in January approved a 30 percent tariff on imported solar panel components, with the rate declining over the next four years. Imported washing machines will also be subject to as much as 50 percent in tariffs for the next three years, US Trade Representative Robert Lighthizer announced in January.Industry insiders have interpreted the move as targeting China, as the country has been the biggest source of solar components to the US for years."We oppose the US' unilateral and protectionist approach and hope the country can deal with it prudently," Commerce Ministry spokesman Gao Feng said after the US move, adding that "we will carry out trade remedies strictly in accordance with WTO rules and relevant Chinese laws."Trump has to behave aggressively to show he is determined to protect US jobs and his country's economy, but fractious Sino-US economic relations will bring more harm to both countries and their peoples, said Bai Ming, a research fellow at the Chinese Academy of International Trade and Economic Cooperation.Not US' wishDuring talks with US officials, Yang also stressed China's commitment to the denuclearization of the peninsula, peace and stability, and the ultimate settlement of disputes through dialogue and consultations.The situation on the peninsula is improving after North Korea's top leader Kim Jong-un invited South Korean President Moon Jae-in to Pyongyang, a situation which does not fit into the US' wishes, Wu said."We're going to make it crystal clear that our military, the Japanese self-defense forces, our allies here in South Korea, all of our allies across the region, are fully prepared to defend our nations and to take whatever action is necessary to defend our homeland," US Vice President Mike Pence said in a Friday interview, the Yonhap News Agency reported.The US still did not realize its previous policy on the peninsula situation has failed because the interaction between North and South Korea is the main solution right now, Wu said.He added that the US may not give up and will continue to take measures to provoke the already easing peninsula tensions. Beijing is ready to maintain communication and coordination with Washington on the basis of mutual trust and respect, so as to seek a proper solution to the peninsula issue, Yang said.China has long been actively urging relevant parties on this issue to calm down and hold dialogues, but there's little China can do aside from that, Wu added.