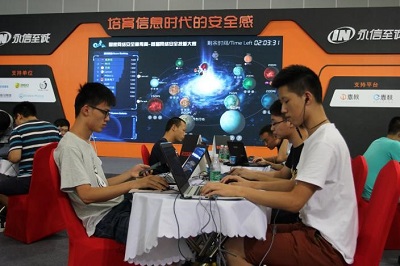 Beijing - In the first nine months of 2017, a total of 710 people were charged with committing online crimes, an increase of 80.7 percent year-on-year, according to China's Supreme People's Procuratorate (SPP), with 334 of the cases indicted, for an increase of 82.5 percent.

China has strengthened its crackdown on online crimes recently, especially after the death of Xu Yuyu, an 18-year-old female who died of cardiac arrest after losing 9,900 yuan ($1,495) of her university tuition to telecom fraudsters in August 2016.

This July, the principal culprit in Xu's case was sentenced to life in prison and all his personal property was confiscated.

Cyber-crimes are getting more complex over time, and better organized and operated, with a rising number of them committed by young people, said the SPP spokesperson Wang Songmiao, who noted that they are also getting more disguised, and come in diverse forms, with more severe consequences.

Wang explained that procuratorates across the country are now making a greater effort into cracking down on telephone scams, individual information infringement, and illegally producing, selling or using malicious base stations, radio equipment or software.

Zhang Xiangjun, deputy director of the SPP's prosecution department, said that cyber-crimes have become more difficult to fight because evidence is getting harder to obtain and the crimes harder to prove.

Many of the illegal sites are located overseas, which also makes it harder to investigate, especially along an entire criminal chain as well as to bring charges against or verify criminal behavior, Zhang explained.

In addition, new types of cyber-crime are harder to define under current laws, which slow the crackdown, Zhang said, and there is the lack of special talent to obtain, identify and define cyber-crimes, also making it hard to fight.

"We're taking steps to tackle these issues effectively. For instance, the SPP has come up with guidelines to assist prosecutors in examining criminal cases, as well as approve arrests and prosecution," Zhang concluded.