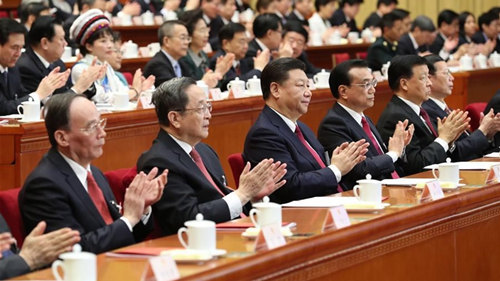 Top CPC and state leaders attend the closing meeting of the fifth session of the 12th NPC at the Great Hall of the People in Beijing, March 15, 2017. (Photo: Xinhua)

China's most important political gathering this year will kick off in just a few days. Known as the "Two Sessions", the 13th National People's Congress (NPC) – the country's top legislature – and the 13th National Committee of the Chinese People's Political Consultative Conference (CPPCC) – the country's top political advisory body – will start their first annual sessions on March 5 and 3, respectively.

Held four months after the 19th National Congress of the Communist Party of China (CPC), this is set to be the most highly anticipated Two Sessions in recent years.

With elections of state leaders, revision of the Constitution and structural reforms of the Party and state institutions topping the agenda, the meetings will tell the Chinese people and the world where the country is heading over the next five years. 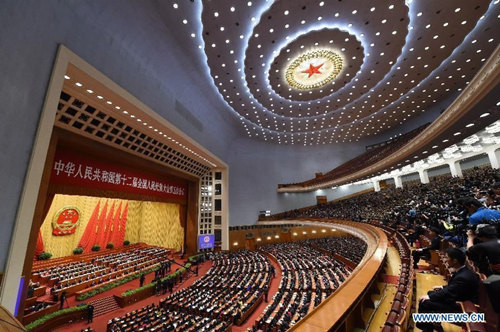 March 15, 2017: The closing meeting of the fifth session of the 12th NPC is held at the Great Hall of the People in Beijing. (Photo: Xinhua)

The NPC is reshuffled every five years, so is the leadership of state organs and the CPPCC.

A total of 2,980 deputies have been elected to the 13th NPC, nearly three quarters of whom are new ones. These lawmakers will elect and confirm the nomination of state leaders at the first session of the 13th NPC, including the president and vice president of China, the premier, vice premiers and state councilors of the State Council, ministers, the governor of the central bank, as well as leaders of the Central Military Commission, the Supreme People's Court, the Supreme People's Procuratorate and the newly established National Supervisory Commission.

New chairpersons of the NPC Standing Committee and the CPPCC National Committee will also be elected during the Two Sessions. 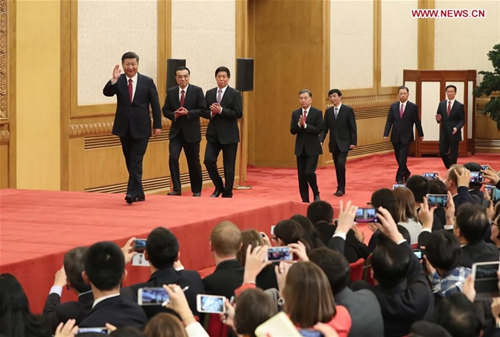 The upcoming reshuffle comes after the election of the Party's new leadership at the first plenary session of the 19th CPC Central Committee last October. Xi and Li were re-elected as members of the seven-people Standing Committee of the Political Bureau of the CPC Central Committee, while the five new members include Li Zhanshu, Wang Yang, Wang Huning, Zhao Leji and Han Zheng.

China has started the procedure to revise its Constitution, and amendments proposed by the CPC Central Committee will be deliberated at the first session of the 13th NPC.

According to a statement made public on Sunday, the CPC Central Committee proposed writing Xi Jinping Thought on Socialism with Chinese Characteristics for a New Era into the country's fundamental law, and removing the expression that the president and vice president of China "shall serve no more than two consecutive terms." 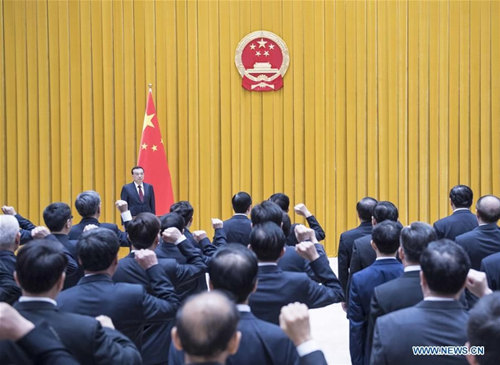 July 3, 2017: Senior officials appointed by the State Council pledge loyalty to the Constitution at a ceremony overseen by Chinese Premier Li Keqiang in Beijing. (Photo: Xinhua)

A sentence stressing the Party's leadership was proposed to be added into the Constitution.

"The leadership of the Communist Party of China is the defining feature of socialism with Chinese characteristics," read the proposal.

As China strives to fight pollution and build a beautiful country, the ruling Party proposed to list ecological advancement as a new function and power of the State Council, or cabinet.

Another major task of the lawmakers is to deliberate a draft law on supervision and creation of a National Supervisory Commission as the supreme supervisory organ, after the establishment of supervisory commissions at the provincial, city and county levels. 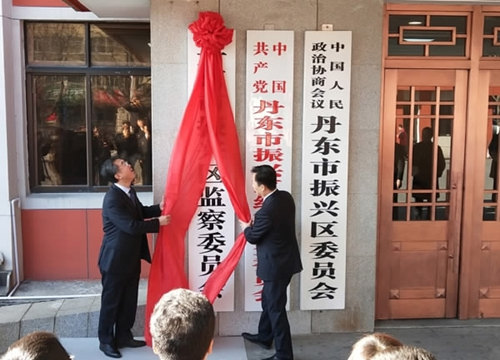 According to the proposal on Constitution amendments, supervisory commissions will be listed together with administrative, judicial and procuratorial organs of the state, all of which are created by the people's congresses to which they are responsible and by which they are supervised.

The supervisory commissions will independently exercise their power of supervision and not be subject to interference by any administrative organ, public organization or individual, said the proposal.

Sharing offices and working together with the CPC's disciplinary inspection commissions, the new commissions will be able to supervise everyone in the public sector exercising public power, including those who are not members of the CPC and those not working in the government. 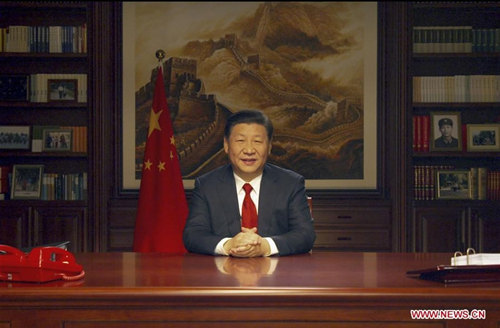 Deepening reform will be a central theme of China's political season in 2018 – a year that marks the 40th anniversary of the adoption of the reform and opening-up policy.

China has launched over 1,500 reform measures since the 18th CPC National Congress in November 2012, and Chinese leaders vow to comprehensively deepen reform and further open the country to the world.

Reform and opening up is the "only path" to fulfilling the Chinese Dream of national rejuvenation, President Xi stressed in his New Year Address two months ago.

As China's reform drive deepens, it has begun to upgrade the program to make its development fairer and more sustainable, shifting its focus from quantity to quality. Messages in this regard that will be conveyed in Premier Li's government work report will be closely watched.

According to a statement released after the Central Economic Work Conference in December, China will further its supply-side structural reform in 2018, with more efforts to improve economic quality, promote innovation, cut overcapacity and foster new growth drivers. 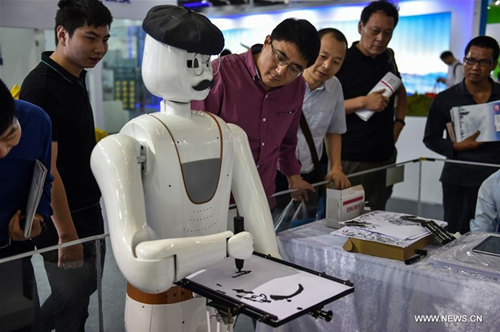 Meanwhile, the structural reform of the Party and state institutions will also be high on the agenda of the Two Sessions. A priority of this week's third plenary session of the 19th CPC Central Committee is to review a draft plan of the reform, which aims to strengthen the Party's leadership, improve state governance and make the whole system more efficient.

This year is crucial for China's economic and social development, as the country edges closer to the goal of eliminating poverty and completing the building of a moderately prosperous society in all respects by 2020.