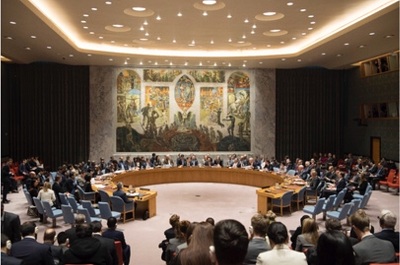 New York (People's Daily) - On Friday afternoon, a UN Security Council emergency meeting over the protests in Iran which was called for by the US was held at the UN headquarters in New York. Russia, China and other members of the Security Council argued that the protests did not fall under the council's mandate to deal with issues related to international peace and security, arguing the protests were an internal matter for Iran.

According to UN rules, a motion on a particular issue must be supported by nine of 15 members, and permanent members cannot veto the procedural vote.

The council first conducted a closed-door vote on whether or not to convene this meeting 2:30 on Friday afternoon.  With support from the UK and the Netherlands, the US was successful in preventing a possible vote to stop any discussion going ahead.

At the session, US ambassador Haley urged the international community to support the protesters.

“Today we are witnessing once again how the US is abusing the platform of the Security Council,” said Russian Ambassador Vassily Nebenzia,  “Let Iran deal with its own problems .”

Wu emphasized that China hopes and believes that with the efforts of the Iranian government and the people, Iran will maintain its stability and achieve development.

The situation in Iran did not pose a threat to international peace and security nor was it on the agenda of the Security Council.

The Council's discussions on the internal situation of Iran did not conform to the responsibilities of the Council as stipulated in the UN Charter, and did not help solve the problem in Iran, Wu said.