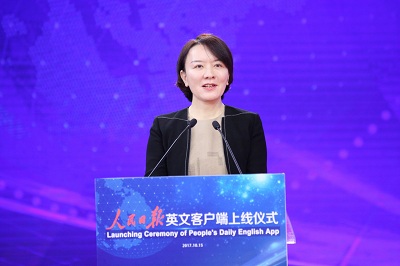 Welcome to People’s Daily, and thank you all for being with us to witness the launch of our English App. Just now, President Yang Zhenwu made a comprehensive and thorough presentation on the necessity of developing this English app. Now, I’m going to present our ideas of developing this app from the operational perspective.

I would like to use the magical auxiliary verb from English-“will”- to summarize our understanding of this app from different aspects.

Let me start with the first “will”: DEMAND.

Two years ago, one of our correspondents had an interview with a senior official in the US during President Xi Jinping’s visit. After hearing the briefing of international development of People’s Daily, the US official asked, “Does People’s Daily have an English app? I would like to download it and know more about China.”

Last month, People’s Daily held a grand media event -- 2017 Media Cooperation Forum on Belt and Road in Dunhuang, Gansu Province. It was attended by representatives of 265 media organizations from 126 countries and international organizations.

One foreign guest told me that China-led globalization is gaining momentum. He hopes People’s Daily will host more international media events and become more global, because “the world needs to know China and hear its voice more than ever.”

We have heard more and more people call for and demand an app over these last few year. As President Xi says, “China is entering the spotlight on the world stage in a way unlike that of any other major country. Now, the entire world is looking for the key to the ‘China miracle’.” We are deeply aware that globalization is an inevitable challenge that People’s Daily must face head-on.

The second “will” is WISH.

Our overseas correspondents once told me that on the west coast of the US, exchanging WeChat accounts sometimes replaces business card exchanges among people in high society. The Russian version of AliExpress, Alibaba's global e-commerce platform, which is heavily advertised in Moscow’s subways, is in the top 10 most visited websites in Russia. Also, China’s shared bicycles can be frequently seen on the streets of the UK.

China is the leading runner spotlighted on the global stage. The country is reaching out to the world with unprecedented speed and desire. As a leader in Chinese media, People’s Daily is obliged to facilitate the exchange between China and the world, and tell China’s stories to the world.

The third “will” is RESOLUTION.

Fortunately, the People’s Daily has not only the need and wish, but also the resolution and confidence to achieve our goals.

The last two years saw not only rapid development of the Internet in China, but also People’s Daily’s achievements in media convergence and improvement of our global communication capacity.

It’s fair to say that the progress of the times and China’s development gives us expectations and confidence, and the past experience and achievements of People’s Daily inspire us.

This year, I went to Austria and had dialogues with some Austrian media practitioners. When I told them that the total number of users and readers of People’s Daily news products on different outlets have surpassed 600 million, they were shocked, saying the figure was almost equal to the total population of  Europe.

The impressive achievements should be attributed to our long-term endeavors in developing our new media sector. Without the launch of People’s Daily’s official Weibo account on a stormy night in 2012, we would not have taken the leading position of the latest development trends in China’s media circles.

Without experimenting and then implementation of our Media Hub, a media convergent platform developed by People’s Daily, we would not have a strong team of journalists who are capable of writing articles and making videos as well.

In addition, without the outstanding performance of our social media accounts on Twitter, Facebook and YouTube, the howling success of the English version of the Global Times and the more than 200 million downloads of the People’s Daily Chinese app, we  would not have this day to witness the launch of this English app.

Just as President Yang has pointed out, this app is not built from scratch but based on our previous efforts to promote media convergence and improve our global communication capacity.

The fourth “will”, FUTURE, which I think is the most important.

Some people believe that the Internet will become a platform for many things. Those that succeeded on the Internet provided platforms in various iterations. They share the features of “crossover, integration, openness, and win-win”.

Today, we are honored to have so many high level government officials present. Also, a strategic partnership agreement among us will be signed later. People’s Daily English app is the exact platform to deliver Chinese stories, provide information and services tailored for the different demands of our clients, and most importantly, connect China and the world.

In the future, this app will not only be People’s Daily journalists telling the story of China and the world, but will have the concerted efforts of our strategic partners present, and will deliver vivid and diversified stories of China to the world.

Taking this opportunity, we’d like to extend to the public an invitation to say that People’s Daily is ready to join hands with more collaborators to engage in more integrated cooperation. Let us work together and greet the world with China’s voice and enrich the world’s imagination with stories of China.