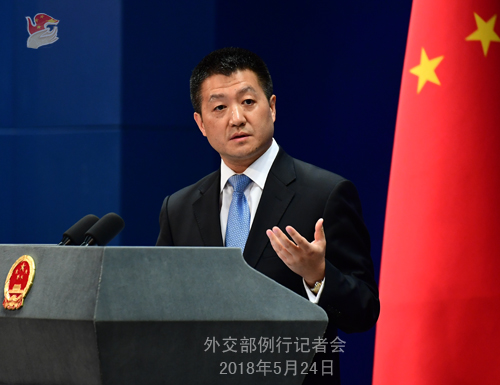 BEIJING, May 24 (Xinhua) – China will not allow exchange programs to be used to coerce it into giving up its "inherent rights" in the South China Sea, according to a Foreign Ministry spokesperson Thursday.

It has been reported that the Pentagon on Wednesday disinvited China from a major US-hosted naval drill in response to what it sees as China's militarization of islands in the South China Sea.

"We have noticed relevant reports," said spokesperson Lu Kang, noting that China had indisputable sovereignty over islands in the South China Sea and its adjacent waters.

"It is an inherent right for China, as a sovereign state, to carry out normal construction activities and normal military training on its own territory," Lu said.

"The activities and training are necessary measures for China to safeguard its sovereignty and maintain regional peace and stability, and they have nothing to do with so-called militarization," Lu said, noting that the US side always accused China of militarization and was not qualified to make such remarks.

"Strengthening military-to-military exchanges is also a US appeal, and it is no use coercing China to give up its inherent right by one or two exchange programs," said Lu.

"Whether having such military exercises or not, whether inviting China or not, will never change China's will to maintain regional peace and stability in the South China Sea, or shake China's firm resolution to safeguard its own sovereign rights and security interests."