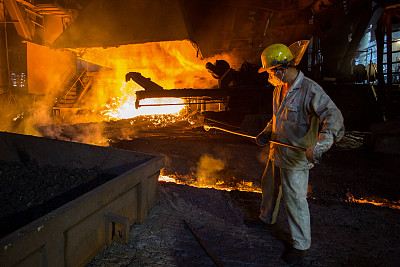 China's steel industry supports the Chinese government in taking various countermeasures to deal with challenges from the US, an official said on Wednesday.

"We have to face the challenges posed by the US. Even though we do not want to fight a trade war, which will surely cause losses, we are not afraid of it either," said Liu Zhenjiang, head of China Iron and Steel Association (CISA), according to a Xinhua report.

The steel industry will actively respond to the situation, Liu noted.

"Since 2015, the US has deliberately created friction in Sino-US steel trade, which have been intensifying. The difference in 2018 is the trade war has entered a situation of imminence. Trump's trade protectionism has escalated with clear purpose and such approach has made new trouble for the world," Liu added.

"Take the Section 337 investigation as an example, the results of the US anti-trust probe are of significance in the current context. We Chinese should have the courage to say no and defend our own interests with legal tools and rules as our weapon. China's steel industry accounts for half of the world's steel output. As one of the steel powers, we need to participate in the global competition and win the battle," Liu said.

The office of the US Trade Representative (USTR) announced a proposed tariff list on 1,300 Chinese products on Wednesday. It includes iron, alloy steel, stainless steel and aluminum alloy, taking up three pages on the website of the US trade office, and being the main targeted area.

Effective Monday, China's Customs Tariff Commission of the State Council has decided to impose a tariff of 15 percent on 120 items of products imported from the United States including fruits and related products, and a tariff of 25 percent on eight items of imports including pork and related products from the country, according to a statement posted on the Ministry of Finance website.

The statement said it was a countermeasure in response to a previous US move to slap tariffs on steel and aluminum imports.

Despite worldwide objections, the US administration began imposing a 25 percent tariff on steel imports and 10 percent tariff on aluminum imports on March 23 under Section 232 of US Trade Expansion Act of 1962 that the foreign imports pose a national security threat.

The US International Trade Commission (USITC) announced its determination on March 19 to terminate the anti-trust case, also known as a Section 337 investigation against Chinese steel companies.

CISA organized Chinese steel companies to actively respond to the complaints and after 20 months' efforts, the US steel producers who filed the case failed to provide evidence on anti-trust damages and were unable to file an anti-trust complaint.

US Steel filed a complaint with the US International Trade Commission (ITC) in April 2016, under Section 337 of the Tariff Act of 1930, against around 40 Chinese steel producers and their distributors.