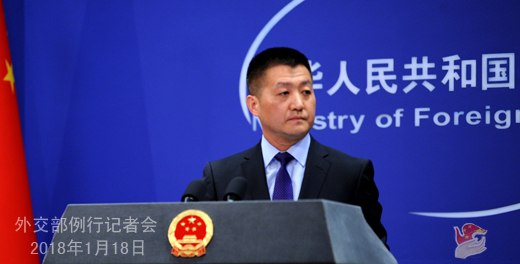 Media reported that the DPRK and ROK Wednesday agreed to let their athletes march together under the unified flag of the Korean Peninsula at the opening ceremony of the Pyeongchang Winter Olympics next month.

The agreement was reached at vice ministerial-level talks between the two countries, which were held Wednesday at Peace House, a building on the South Korean side of Panmunjom which straddles the heavily guarded border.

Meanwhile, ROK Foreign Minister Kang Kyung-wha said the ROK will push forward dialogue for the peaceful resolution of the nuclear issue on the Korean Peninsula.

Spokesperson Lu Kang said the two countries on the Korean Peninsula had reached important consensus on cooperation at the Pyeongchang Winter Olympics and improving their relations, reflecting constructive efforts on easing the situation on the peninsula.

"We hope the DPRK and the ROK can keep the positive momentum of their interactions and find the greatest common factor, in order to realize denuclearization and achieve permanent peace on the Korean Peninsula," Lu said.

He stressed all parties in the Korean Peninsula issue should cherish the current situation, and the international community should seize the opportunity to actively promote peace rather than stir up trouble, as well as making concrete efforts to resolve the issue.