Yi Gang was chosen to take over as governor of the People's Bank of China (PBC) at a plenary meeting of the annual session of the 13th National People's Congress on Monday.

Being a successor of veteran central banker Zhou Xiaochuan, Yi said that he would keep following the prudent monetary policy in China, while pushing forward financial reform and opening-up and maintaining financial stability.

Yi will work closely with Liu He, the economic advisor of President Xi Jinping for financial and economic affairs. 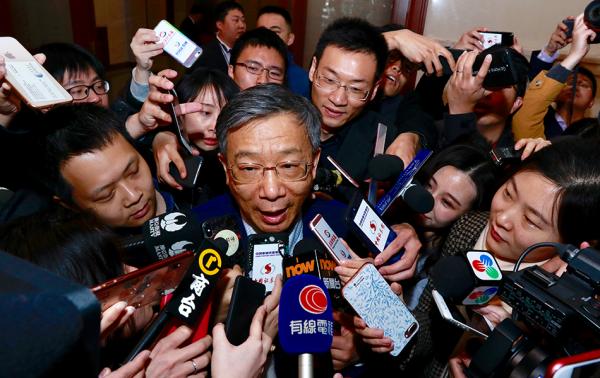 Yi Gang at group interview at the Great Hall of the people. (Photo: thepaper)

“I feel peaceful and solemn now as the mission is important and glorious,” Yi told journalists after his nomination was endorsed.

The central government will announce a series of new reform and opening-up policies at the Boao Forum for Asia in early April, Yi added.

Yi will lead the Chinese central bank control the currency supply gate, while reining in the systemic financial risks.

After a decade of heavy credit stimuli used to maintain fast growth, President Xi Jinping has declared a “new era” in which growth quality and risk controls should take precedence over quantitative growth targets.

In his article published in the January issue of China Finance, a bimonthly journal in the Chinese financial community, Yi said that the monetary policy in 2017 remained stable and neutral, achieving good results, as the financial system was steadily de-leveraging.

Yi also believes that the extensive growth model is no longer appropriate for China’s economy. The country needs to strengthen regulating interest rates and further define the transmission of policy interest rates to financial markets and the real economy.

Sharing his outlook on 2018, Yu said that there are both opportunities and challenges. From a global point of view, international economic recovery may continue.

The monetary policy of major advanced economies will further normalize. The Federal Reserve's further move on interest rate increases will be of concern to all sectors, and global interest rates may rise, Yi said.

From a domestic perspective, the stability and synergy of China’s economy have been improved, together with the quality and efficiency, thanks to the supply-side structural reform, streamlining of administration and decentralization as well as the innovation-driven strategies.

At the end of 2017, Yi commented on the renminbi's participation in the Special Drawing Rights (SDR) at the China Financial 40 Forum (CF40): "This is a milestone, but it is also a new starting point."

Yi, 60, has been a PBC vice governor since 2008. He also served as director of the State Administration of Foreign Exchange, a semi-autonomous unit of the PBC, from 2009 to 2016.

Yi earned a business degree from Hamline University in St Paul, Minnesota, and a PhD in economics at the University of Illinois before moving to Indiana University at Indianapolis as a professor in 1986.