HEADLINE China to take 'necessary measures' against US new tariffs

China to take 'necessary measures' against US new tariffs 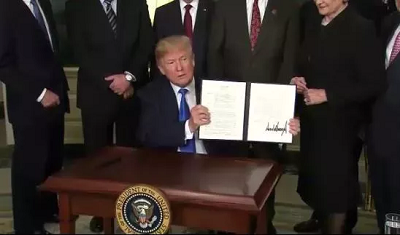 People's Daily - China has warned that it is ready to retaliate with "necessary measures" against the tariffs the Trump administration imposed on Thursday.

US President Donald Trump on Thursday directed his top trade adviser to level a new round of “protective” tariffs and “investment restrictions” against China. The US plans to impose up to $60 billion in tariffs on Chinese goods and limit the China's investment activity in the US.

The Dow dropped more than 500 points, or 2 percent, on Thursday, underlining growing concerns among investors about looming tariffs on China. The S&P 500 and Nasdaq lost nearly 2 percent apiece, according to CNN.

Economic and trade ties have always been the bedrock of China-US relations. Over the past 40 years, China's trade with the US expanded 232 times, with bilateral investment surpassing $230 billion, the commerce ministry statement added.

A total of 45 business associations and chambers in the US are opposed to the unilateral acts of Washington.

During the two sessions earlier this month, Chinese Premier Li Keqiang noted,“There are no winners in a trade war should it happen between China and the US.”