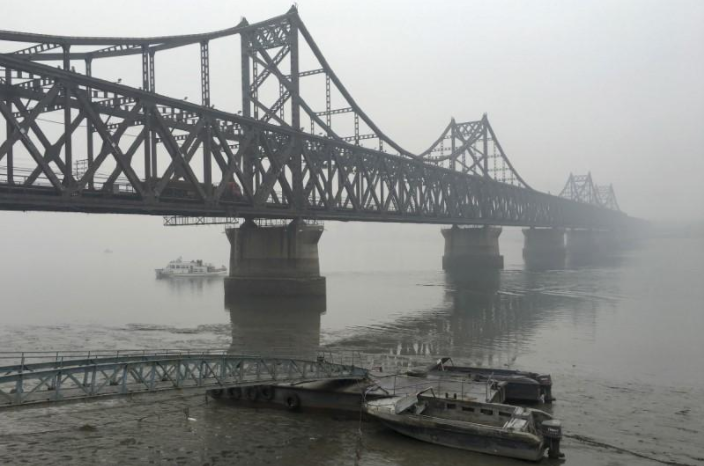 Trucks move across the bridge linking North Korea with the Chinese border city of Dandong in this March 3, 2016 file photo. REUTERS/Megha Rajagopalan

China may not agree to cut off oil to North Korea as the US has requested since unilateral sanctions may lead to a humanitarian crisis on the Korean Peninsula and would not solve the nuclear issue, a Chinese expert said.

US ambassador Nikki Haley said at an emergency UN Security Council meeting on Wednesday that the US asked China to cut off oil to North Korea, which is "a drastic step that Beijing … has so far refrained from doing," Reuters reported on Thursday.

"China is unlikely to totally cut off oil to North Korea as the US requested since the move overlooks the lives of North Koreans and may lead to a humanitarian crisis, which would also have an impact on China's border areas," Da Zhigang, director of Heilongjiang Provincial Academy of Social Science's Institute of Northeast Asian Studies, told the Global Times on Thursday.

Geng said that the UN has passed several resolutions on North Korea, which should be fully implemented and China will still handle the issue with the purpose of advancing the denuclearization of the Korean Peninsula, safeguarding regional peace and stability and promoting negotiations.

It is irresponsible for the US to ask China to impose unilateral sanctions on North Korea when China, together with the other countries, have fully implemented the UN's recent sanctions, reducing the amount of coal and oil to North Korea, and the sanctions have gradually taken effect, Da said.

The UN Security Council unanimously adopted Resolution 2375 over its nuclear test on September 3, asking all UN members to cap refined oil exports to North Korea at 500,000 barrels starting from October 1 to the end of the year and 2 million barrels annually from January 1, 2018.

China's Ministry of Commerce vowed to implement the resolution by halting exports of liquefied natural gas and gas condensate to North Korea from September 23 and limiting exports of refined oil from October 1, the Xinhua News Agency reported.

"The US should not shift the responsibility of resolving the North Korean nuclear issue to China as China's influence on North Korea is not as big as the US has assumed," Da said.Da said that military clashes remain a possibility considering the current strained situation on the peninsula, but all parties, especially the US and its allies South Korea and Japan, should jointly resolve the issue through diplomacy.

Haley said on Wednesday at the UN Security Council meeting, "If war does come, it will be because of continued acts of aggression like we witnessed yesterday," Reuters reported.

Geng said on Thursday that China's stance is to safeguard the nuclear non-proliferation system and hopes the international community would make joint efforts with China. "The North Korea nuclear issue can only be solved through dialogue. Using force will not be an effective option," Geng said.