China urges US to abandon tariff proposals, return to dialogue 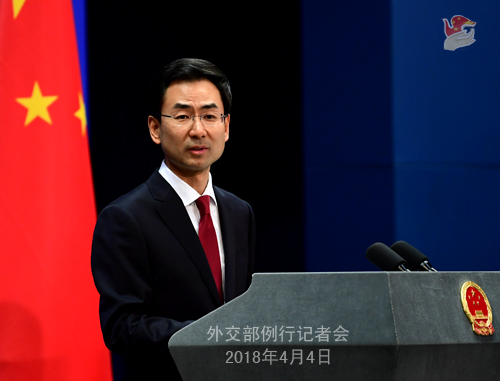 China urged the US to abandon tariff proposals and engage in dialogue, consultations and win-win cooperation on Wednesday.

"There is no winner in a trade war, and a country that starts a trade war will eventually hurt itself," said Chinese Foreign Ministry spokesperson Geng Shuang at a daily press briefing.

US business groups, ordinary consumers, media and think tanks have shown great concern over the US actions and the potential consequences. Many countries and international organizations also expressed opposition to US unilateralism and trade protectionism.

"We hope that the US will listen to these rational voices and abandon its wrong doings at an early date and return to the right track of dialogue and consultations and win-win cooperation," Geng said.

"Those who attempt to make China surrender through pressure or intimidation have never succeeded before, and will not succeed now," he added.

The Trump administration on Tuesday (local time) released a proposed list of 1,300 Chinese products subject to additional 25 percent tariffs under Section 301 investigation despite strong oppositions from the both countries' business groups.

In response, China's Ministry of Finance on Wednesday unveiled a list of products worth $50 billion from the US that will be subject to higher tariffs, including soybeans, automobiles and chemical products.