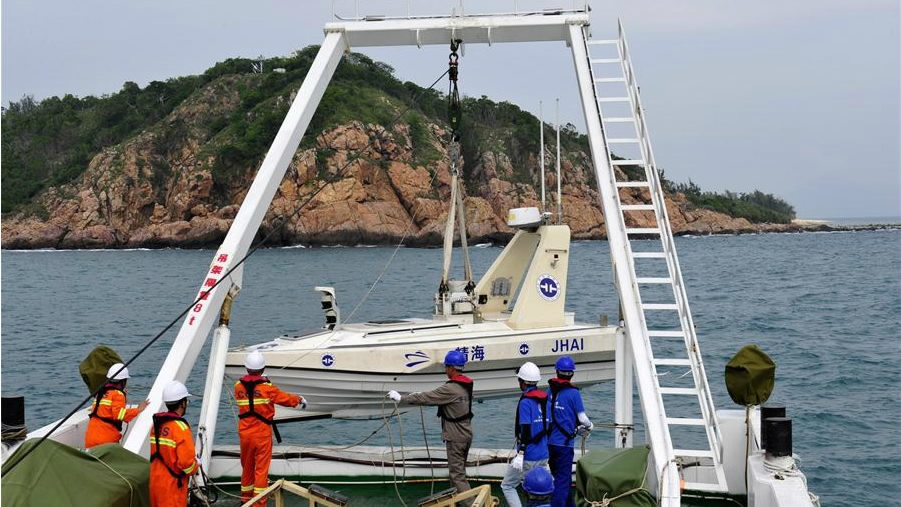 China has sent two unmanned boats to join a geological survey along its 18,000 km coastline, especially in main coastal zones.

Guangzhou Marine Geological Survey has introduced two unmanned boats, developed by Shanghai University, to collect data and take video, which used to be done by surveyors.
The unmanned boats, named Jinghai N0. 3 and Jinghaihong respectively, are carried by China's new-generation offshore fishing ship YUEXIAYU 90215, which has a displacement of 887 tonnes and is equipped with a crane for lifting the boats.
The boats have just finished surveying the geological marine condition in Dongmaozhou Islands off Sanya city in Hainan Province, where surveyors failed to carry out a field survey last year after ships ran aground.
It was the first time that unmanned boats had been used in such a survey, said senior engineer Wen Mingming from the Guangzhou subsidiary of China Geological Survey.

"Many shallow coasts are complicated and likely to leave survey boats stranded. While, the unmanned boats can fit in and eliminate risks for surveyors," Wen said.
Jinghai No. 3 is 6.28 meters long and 2.86 meters wide, with a load capacity of 2.6 tonnes and a cruising power of 200 nautical miles. It can conduct automatic topographical mapping, sea floor exploration and environmental monitoring.
The 2.7-meter-long Jinghaihong is the newest model developed by the Shanghai University, with a speed of 6 nautical miles per hour. It can perform automatic route planning and navigation while collecting hydrological data.
Shanghai University unmanned vessel research institute is China's first institute for designing and developing such vessels with advanced communication and computing systems.
Guangzhou Marine Geological Survey is responsible for comprehensive geological survey of coastal zones in Guangdong, Fujian and Hainan provinces, as well as Guangxi Zhuang Autonomous Region.