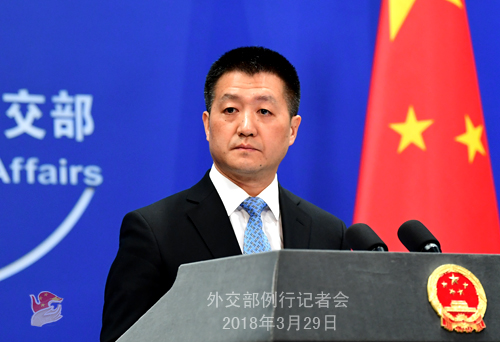 China welcomed Thursday’s announcement that the first summit in more than a decade between the Democratic People's Republic of Korea (DPRK) and the Republic of Korea (ROK) would be held on April 27 in the truce village of Panmunjom.

China's foreign ministry spokesman Lu Kang said at a daily press briefing that China appreciated the efforts made by both the DPRK and ROK.

As a close neighbor to the Korean Peninsula, China has always been glad to see dialogue between the DPRK and the ROK to improve relations and promote reconciliation and cooperation, because it serves the common interests of both sides and can also contribute to regional peace and stability, said Lu.

It will be the third summit between leaders of the two countries since the 1950-53 Korean war ended in armistice, and Kim Jong Un will become the DPRK’s first leader to set foot on South Korean territory if held as agreed upon.

The first and second inter-Korean summits were held in Pyongyang in 2000 and 2007, respectively.

Lu said that positive changes have taken place on the Korean Peninsula this year, with a focus on dialogue, as China has always insisted on and promoted.

Lu called on all parties concerned to support the improvement of inter-Korean ties, make concrete efforts to facilitate peace talks, and promote the denuclearization of the Korean Peninsula and a political solution to the Korean Peninsula issue in order to bring peace, stability, development and prosperity to the region.

The agreement on the summit date was reached during a high-level dialogue between the two sides, which were held earlier in the day at Tongilgak, a DPRK building in Panmunjom.

The two sides also agreed to hold working-level talks at the South Korean side in Panmunjom on April 4 to discuss protocol, security and media issues. A separate dialogue on communications will also be held, according to the joint statement.