HEADLINE China will not back down in trade fight with US: China's envoy to Canada

China will not back down in trade fight with US: China's envoy to Canada 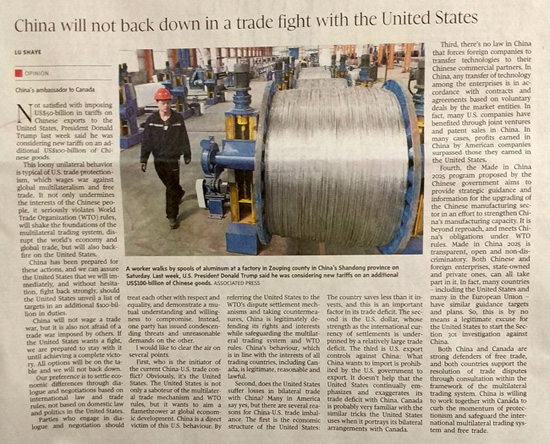 Ottawa (People's Daily) - Lu Shaye, China’s ambassador to Canada, made it clear in an opinion piece published Monday by Canadian newspaper The Globe and Mail that “China will not back down in a trade fight with the US.”

In the article, Lu accused the US of “loony” behavior and trying to sabotage the global trading system.

“Loony unilateral behavior is typical of US trade protectionism, which wages war against global multilateralism and free trade,” Lu said.

Lu added that the US’ actions undermine the interests of the Chinese people, violates World Trade Organization (WTO) rules, “shakes the foundations” of the multilateral trading system, and disrupts the world’s economy and trade. He also said these actions will eventually “backfire” on the US.

Lu reiterated China’s stern position, saying that “China has been prepared for these actions, and we can assure the United States that we will immediately, and without hesitation, fight back strongly” if the US chooses to unveil an additional $100 billion in tariffs.

“China will not wage a trade war, but it is also not afraid of a trade war imposed by others,” Lu said. “If the United States wants a fight, we are prepared to stay with it until achieving a complete victory. All options will be on the table and we will not back down.”

Lu said that China’s preference is to settle economic differences through dialogue and negotiations based on international law and trade rules, not based on domestic law and US politics.

He also pointed out that “parties who engage in dialogue and negotiation should treat each other with respect and equality and demonstrate a mutual understanding and willingness to compromise. Instead, one party has issued condescending threats and unreasonable demands on the other.”