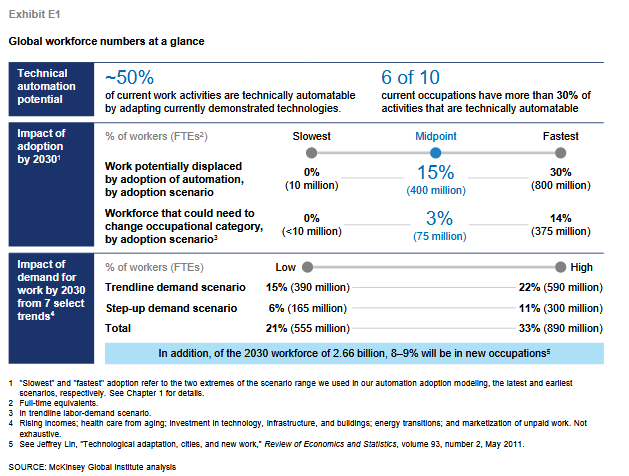 Beijing (People's Daily) - 375 million people may have to change occupations by 2030, and a third of this number are Chinese, said a report on the impact of automation from McKinsey Global Institute (MGI) released in early December.

About half of all global job opportunities have the potential to become automated by adapting current technology, in addressing human concern on being replaced with machines.

60 percent of occupations, at least one-third, had the potential to become automated based on the assessment of today’s technological capabilities.

The report reveals a mosaic of potential occupation shifts in the years ahead, and how it will impact skills and wages.

Findings have revealed that automation has the potential to disrupt human workplaces, but the results are varied according to country and occupation.

By 2030, 16 percent of today’s jobs in China will be filled by machines, as explained in the chart below, leveling the global average to 15 percent.

But in the US and Germany, both developed countries represented in the chart below, the number is estimated to reach almost 25 percent, a figure far higher than other national averages. 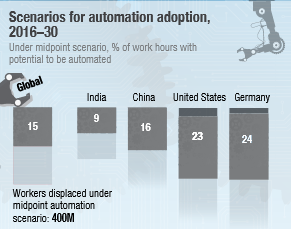 The numbers indicate how high wage earners within the work force of developed nations stand a greater chance of being replaced by a machine.

However, other job areas will experience steady growth. New job opportunities will emerge, and some will be replaced with other opportunities.

Professionals, caregivers, and managers will be in high demand by 2030. Occupations that cannot be filled by a machine.

130 million new jobs in the elderly healthcare industry are expected, along with higher salaries.

Demand for caregivers will increase in developed and developing countries, especially for those who will need home care, personal aide, and nursing assistants. 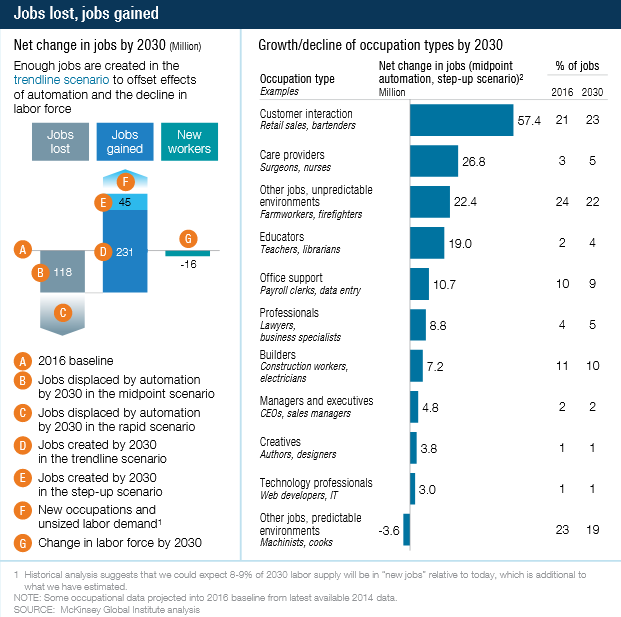 The future of work in China

China will face the greatest number of job shifts, and at least 120 million can expect to change their job.

China’s workforce transitioned from agriculture to manufacturing over the course of 25 years (1990-2015).

Through automation technology, China could experience labor shortages which would hamper advancements in productivity.  But the country it will see an increase in its elderly population by 2030, as 17 percent will be 65 or older, thus giving rise to opportunities in the private healthcare sector.

Overall, the McKinsey Report shows how China will benefit from the impact of automation.