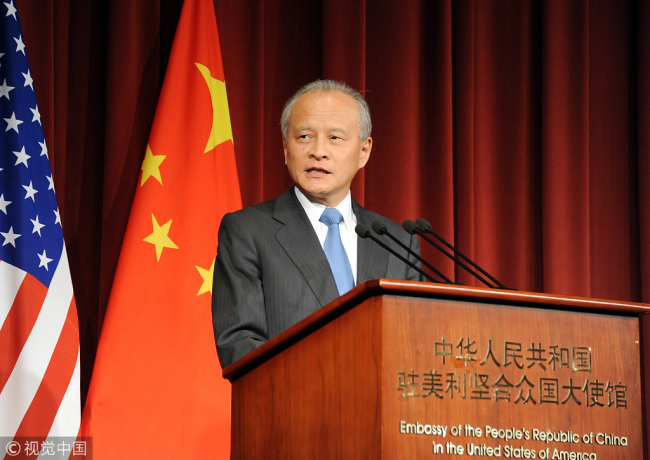 People's Daily (Washington) - Chinese Ambassador to the United States Cui Tiankai has called on China and the United States to enhance dialogue to eliminate the "deficit of mutual understanding." He also warned that some people in the US are trying to place a "glass curtain" between the two countries.

Cui made the remarks on Friday at a panel discussion, "Forty Years of US-China Relations,” hosted by the Center for Strategic and International Studies (CSIS), a policy research organization based in Washington, D.C.

When asked about how to overcome the mutual suspicions between the two countries. Cui pointed out that the best way for China and the United States to avoid the "Thucydides trap" is to open up a new path .” "We hope to work with the United States to build a new pattern of relationship between great powers featuring non-conflict, non-confrontation, mutual respect and win-win cooperation,” Cui said.

Cui also said that some people in the US are trying to set up a "glass curtain " between China and the United States, so as to impede bilateral exchanges in economy, science and technology, and people-to-people engagements, and even stoke suspicion against exchange students and research fellows from China.

“China hopes these ominous trends will not be recognized by U.S. mainstream society,” Cui said.

Talking about the trade friction between the two countries, Cui said that both sides are working hard to negotiate. “I believe that as long as the two sides persist in taking care of each other's concerns, we can find a proper solution.”

William Cohen, former Secretary of Defense, also attended the panel discussion. He said no one can contain China and the US "shouldn't try to contain it". Cui said that the biggest challenge for large countries now is not posed by foreign competitors, but by their domestic governance.

Cui said there is increasing competition between the two countries. "I think we can look at the example of sports. If we want to run faster, you don't look over your shoulder to see if somebody is catching up," Cui said. "You could feel somebody catching up. This will force you to run even faster.