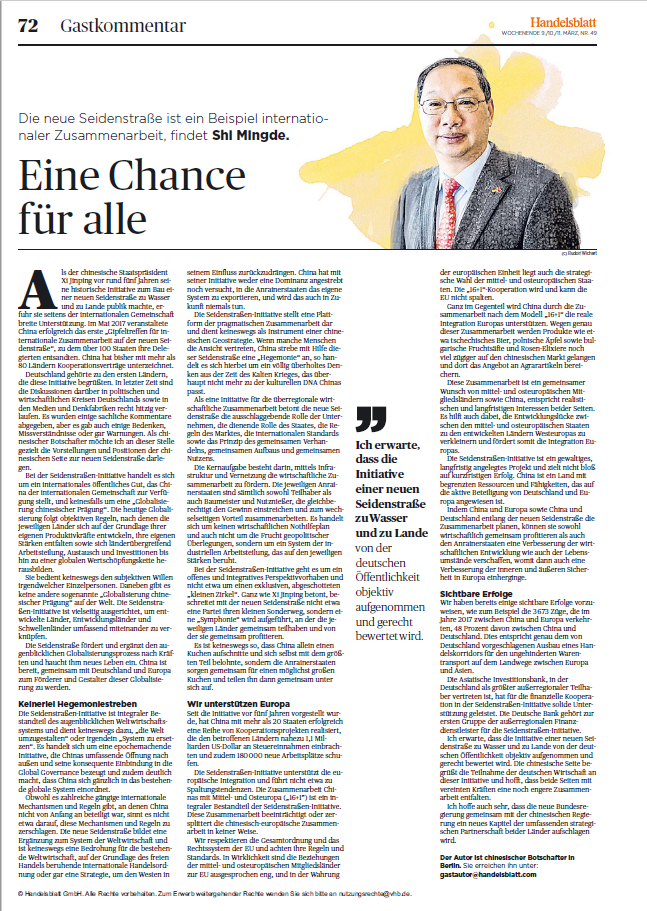 Berlin (People’s Daily) - The Belt and Road (B&R) initiative is “an opportunity for all parties to cooperate,” said Shi Mingde, the Chinese ambassador to Germany, in an article he penned for Germany’s leading business newspaper Handelsblatt published on Friday.

The article responded with data and facts to negative voices from Germany and Europe over the initiative, a massive Chinese infrastructure project aiming to connect Asia, Europe and Africa.

Shi emphasized that the B&R initiative is not an effort by China to horde the economic pie, but rather to grow the pie bigger for the benefit of all countries along the trading routes.

Recently, the initiative has faced a string of criticism in Europe, including in Germany's political circles, think tanks and media outlets.

This includes charges that China is "writing new international rules," dubbing the initiative "China's version of globalization," and claims the economic benefits are for "China's exclusive enjoyment.”

The initiative was even a topic in the negotiations for the new German government to form its cabinet.

Faced with questions in the German media, Shi reiterated the five-point nature of the initiative.

First, it is an integral part of the existing world economic system, not “reshaping the world” or “replacing a system.”

Second, the initiative is a pragmatic cooperation platform, not a geopolitical tool of China.

Third, it is an open, inclusive vision and initiative, not an exclusive, closed “small circle.”

Fourth, the initiative aims to support European integration, not division.

Fifth, the initiative is a grand long-term program, not a one-time project.

China’s resources and capabilities are limited and the initiative requires the active participation of Germany and Europe. In this regard, Shi emphasized that there is no globalization with so-called "Chinese characteristics."

China is willing to work together with Germany and Europe as a promoter and shaper of globalization.

The initiative is a supplement to the global economic governance system. It does not challenge the existing international economic and trade order based on free trade, nor is it a strategy to hedge against Western influence.

Shi concluded that with the B&R initiative, China has never and will not seek to establish its rule, nor will it seek to export its own system to countries along the route.