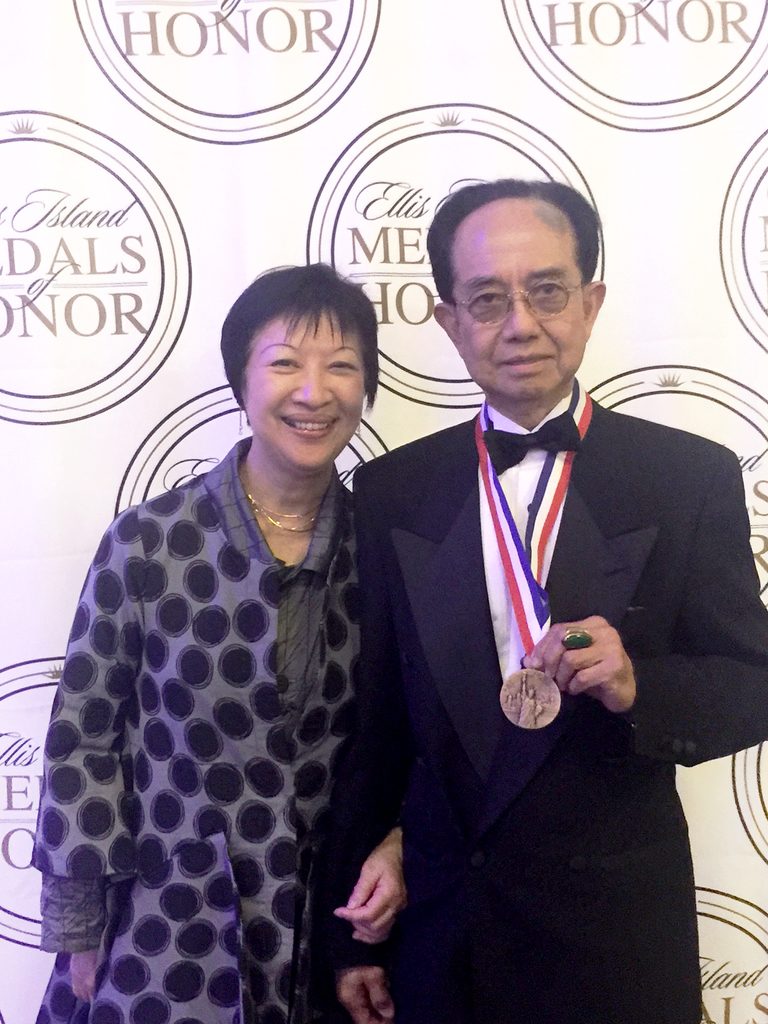 Kwong Lum with Mrs. Lum shortly after he was awarded the Ellis Island Medal of Honor.（Photo/artfixdaily.com）

Chinese American scholar Kwong Lum has been awarded 2018 Ellis Island Medal of Honor, an award bestowed on American citizens who have distinguished themselves within their own ethnic groups.

"I am grateful for the opportunities I have been afforded in China, Canada and the U.S. to support the arts and share my knowledge of Chinese heritage as it was and as it is in contemporary art," said Lum, who is also an artist, poet and chairman of Gianguan Auctions in New York City.

Lum credited his teachers, the artists and ceramicists he has had the honor of knowing, his wife and family. "The open-mindedness I have experienced when people come together to share the joy of art proves to me that community extends beyond neighborhoods and ethnicity."

Over the years, Lum's commitment to furthering the understanding of Chinese art and culture has earned him the respect of museum authorities, art experts and appraisers in China and the United States.

He has been a frequent lecturer at China Institute in New York City as well as a guest on CCTV in Beijing. At the invitation of the UN, he has taught advertising and design in China.

In 2002, Lum founded Gianguan Auctions in New York City. In 2014, a museum bearing his name and housing his collections as well as his own art, opened in Xinhui, Jiangmen, Guangdong. In 2018, he is launching the Kwong Lum Museum of Art online.

This remarkable career began when Lum, as a young artist, was taken in by Master Y. Y. Ting. The maestro taught him Chinese painting as well as antique appraisal and helped him set up a world-class collection. His Sai Yang Tang Collection of Chinese art and ceramics has been called the "Little Forbidden City of New York."

The awarding ceremony was held on May 12 at a gala celebration at Ellis Island, a historical site that opened in 1892 as an immigration station, a purpose it served for more than 60 years until it closed in 1954.

Located at the mouth of Hudson River between New York and New Jersey, Ellis Island saw millions of newly arrived immigrants pass through its doors.