Noordwijk (People’s Daily) – If it’s spring, Holland is the place to be. Bursting with flowers, it is the time to hold the Bloemencorso. The 71st Flower Parade (Bloemencorso in Dutch) set sail at 9:30 am on April 21 from Noordwijk, a western coastal city in Holland.

The annual flower parade is a feast brimming with beautiful colors and delicious perfumes. 20 huge floats and 30 lavishly decorated cars follow a 42-kilometer route from Noordwijk to Haarlem.

The theme for the 2018 flower parade is culture. As the huge floats go by, accompanied by bands and music, spectators along the route not only enjoy a beautiful light show, but also feel the unique culture of The Netherlands. The design of tulips, windmills, blue pottery and other symbols of Dutch culture impress people.

It is particularly noteworthy that the Chinese theme floats add a special color to the parade. The float produced by the Chinese Embassy in the Netherlands is called “Wen Xin Diao Long”, featuring pavilions, bamboo, pine and lotus. They were made of eye-catching flowers like daffodils. 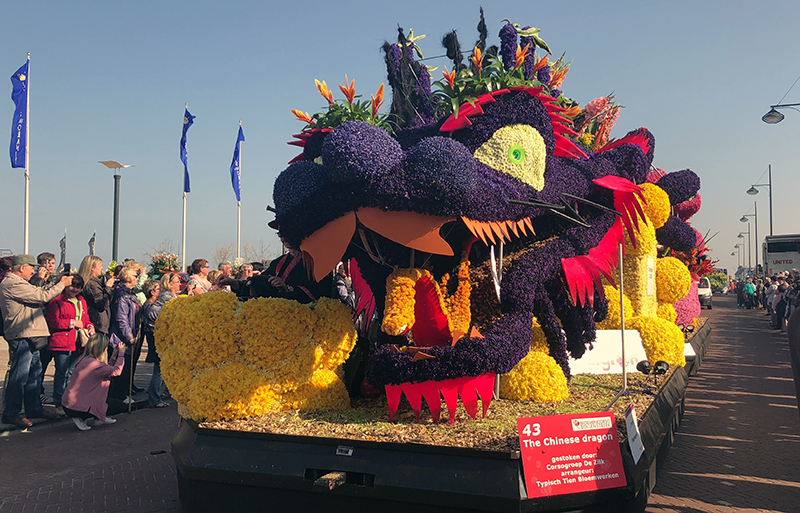 Due to their love for Chinese culture, the Dutch local government and enterprises also produced two large-scale theme floats named "Chinese Dragon" and "Belt and Road", featuring the dragon, camels, porcelain and the Temple of Heaven.

The Chinese Ambassador to the Netherlands Wu Ken was invited to attend the opening ceremony of the float parade. In an interview with the People's Daily, he said that since 2010, China has continuously participated in the Dutch float parade, "With flowers parade as a medium, China and the Netherlands meet here every year. Chinese culture is becoming more and more popular."

Before the 2018 flower parade, local organizations put on their thinking caps to come up with a great design. Dahlias are a common choice for their design as these flowers are grown in large community gardens.

Three days before the parade, there was frenzied activity as the floats will be "pierced". Pierced means to be covered and decorated with bulb flowers. Hundreds of volunteers gather and get down to work piercing or pinning hyacinths, tulips, daffodils, dahlias and others to the floats.

Holland is famous for its flowers. This flower parade is an opportunity to showcase amazing flowers. This is then literally put "on-show" to the public. Hundreds of thousands of visitors from Holland and abroad are drawn to the colorful flower spectacle every year.