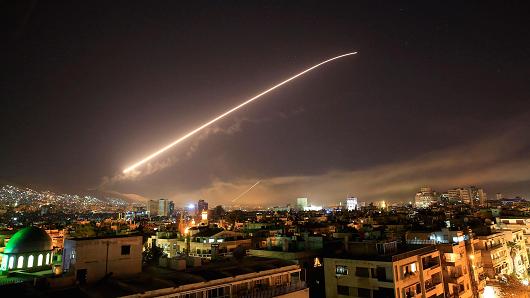 Damascus sky lights up with service to air missile fire as the US launches an attack on Syria targeting different parts of the Syrian capital Damascus, Syria, April 14 (Photo: AP)

The Chinese embassy in Syria issued another safety warning to its citizens, urging travel agencies and individuals to stop visiting there due to a deteriorating security situation on Friday.

In the statement, Chinese nationals living in the country are alerted to stay vigilant, safeguard personal security, strengthen emergency preparation and avoid going to military facilities and crowded places as much as possible, amid “a still complex and dangerous situation".

"A suspected chemical attack hit Damascus last week and the US has threatened military strikes," the statement said, noting high frequency of terror attacks, armed robberies, kidnappings and extortions in the nation.

The Chinese embassy issued their first travel advisory in November 2017, stressing extremely high safety risks of visiting and an extra rescue fee for people intent on travelling there.

Another red alert came in January this year, calling on all Chinese nationals in the country to be safe and prepared for any emergency after a massive explosion killed at least 30 and injured 70 in Idlib, Northeastern Syria.