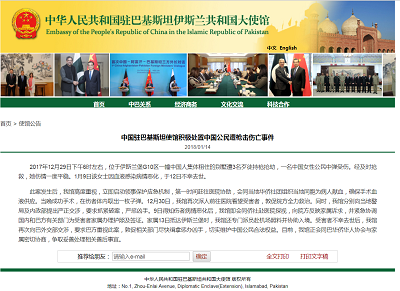 (Screenshot of Chinese embassy's statement on its official website)

China's embassy in Pakistan issued another security alert Monday to Chinese living in that country after a Chinese woman robbed and shot by three unidentified gunmen in Islamabad on December 29 died on January 12.

The woman was rushed to a local hospital. However, due to inadequate medical conditions in Pakistan, she acquired an infection during surgery and died soon after.

No arrest has been made so far, and the Chinese embassy has asked Pakistan's Foreign Ministry to attach great importance to this incident and urged the police to arrest the suspects to protect Chinese nationals' legitimate rights.

The embassy said in its latest alert that Chinese living in Pakistan should strengthen their security measures and enhance safety awareness with the increasing number of burglars and terrorist attacks to foreigners in Islamabad. The embassy also urged Chinese nationals to contact the embassy immediately if he or she is attacked.

In June last year, two Chinese nationals teaching Chinese in Pakistan were killed in the country’s Balochistan Province after being abducted in May.