As Spring Festival approached, Yang Zhuang, a young chef in Hangzhou, Southeast China's Zhejiang Province, pedaled across China. When it was all over, Yang had crossed the provinces of Zhejiang, Jiangxi, Hunan, and Guizhou before setting foot in his hometown of Tongren, Guizhou Province, a trip of nine days and 1,472 kilometers. 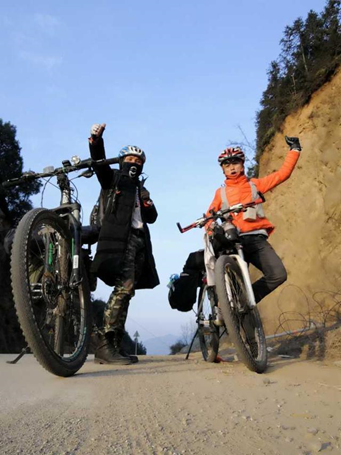 “My friends thought I was asking for trouble,” Yang told reporters on Tuesday, with a gleam in his eyes. “The moment I caught glimpse of the glow of light from my home, every bit of effort paid off.”

For the past few years, Yang returned to Guizhou by plane or train. As usual, he had booked a flight in advance, but surprises unfolded. The restaurant had given him his leave when the flights were beyond his budget, and train tickets were unavailable. Then one of Yang’s colleague proposed he rides home. 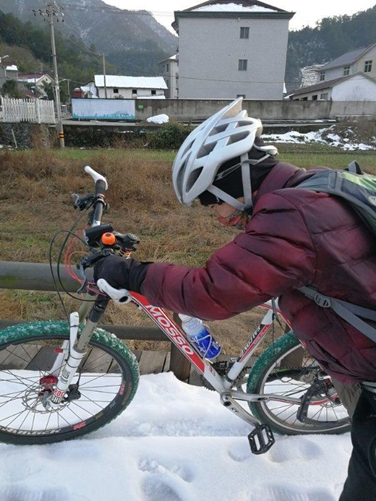 A skilled cyclist who pedaled 2,200 kilometers from Chengdu to Lhasa in 2016, the proposition sold itself rather quickly. Yang settled on biking home for the fun of it, and for rich experience.

With packs of dried foods and a change of clothes, the young man embarked on the journey home in the early morning of February 2.

Setting off at 8 am every day, and concluding at 9 pm, Yang and his partners indulge on snacks from roadside vendors or partook of the dried foods in their bags. They slept in budget hotels where rooms went for 80 yuan a night (about $12), where they often shared a single room, Yang recalled. He ended up spending 800 yuan on his way home (around $126), less than what he would have paid for a full-price ticket.

“Despite the incredible scenery along the way, I had a rough journey, harder than I expected.” Parts of Zhejiang were covered with snow, so Yang and his companions trembled with cold and became ill on a couple of occasions.

On the 9th, Yang was “numb with cold and pain,” and could “barely stand up.”

From February 2nd to 10th, this homesick youth kept jotting down dribs and drabs China’s WhatsApp: WeChat, on his route to Tongren. To assuage the cheering pain, Yang kept cheering himself with wishes and words.

At midnight on February 10th, Yang, overcome by the thrill of coming home, shot a video of his hometown in shimmering in haze of its streetlights.

It was the wee hours of a cold, moonlit 11th, and the village was sparkling and sleeping soundly.

“I stopped at a farmhouse, fished out a bunch of keys, unlocked the wooden door and stepped in — I knew I was home… my parents were still awake, waiting for their child to come in,” Yang said.