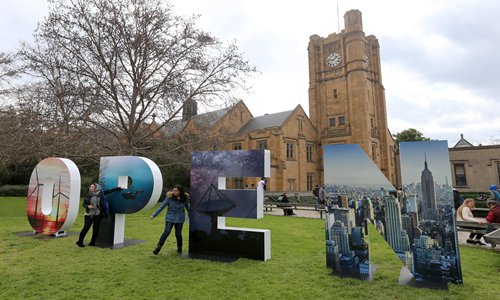 Students take photos at the University of Melbourne on its open day in 2014. （Photo: Global Times）

After eight months of waiting, Valerie Wang (pseudonym) finally decided to abandon her dream of studying for a PhD in Australia. Instead, she's thinking of applying to British schools. "Even though my mentor and my school (in Australia) are extremely nice, the visa issue cannot be solved due to political reasons," the 22-year-old from China's Jiangxi Province told the Global Times. "I have to develop a new life plan now. It might be a bit late, but it's time I faced reality." Last year, Wang was accepted by the University of New South Wales (UNSW) to study mechanical engineering, with funding from the China Scholarship Council (CSC) under the Ministry of Education. As CSC scholarships are government-backed, she thought she would have a smooth application process. However, after she sent her visa application last August, she received no news, no updates and no further information. Wang is not the only one; over 100 Chinese applicants are also sitting idly by while waiting for their visas.This uncertainty has severely affected their lives. Some applicants told the Global Times that they have quit their jobs or turned down offers from other schools. Now they have to prepare for a worse-case scenario.They now believe their applications have been impacted by recent tensions in Sino-Australian relations. This incident has also drawn the attention of CSC, which declared that applicants with the center's funding can file to switch countries. Other Chinese students who have heard about the visa trouble have expressed online that they would "vote with feet" by choosing US or Europe instead of Australia for their future studies.Waiting with a price