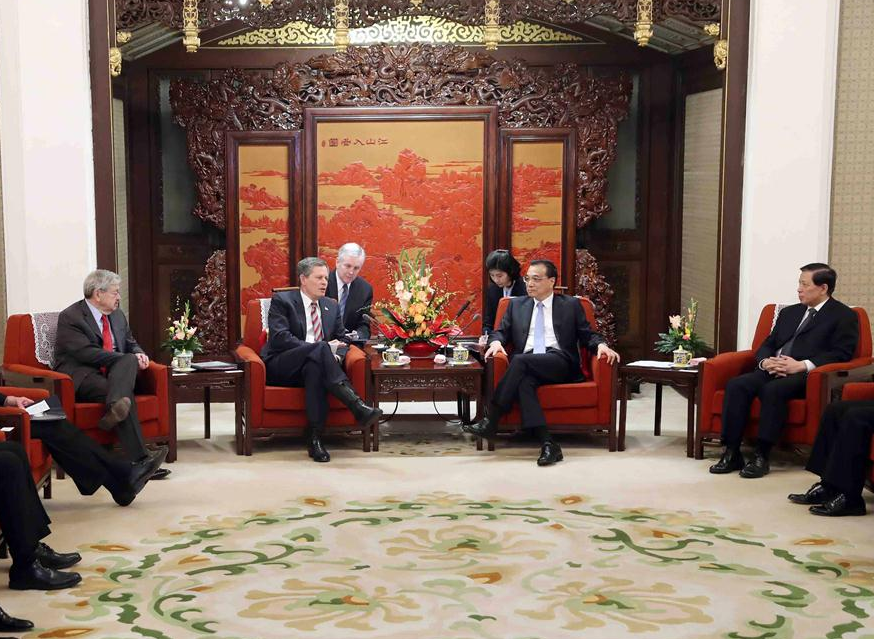 Chinese Premier Li Keqiang on Tuesday called on the US Congress to play a constructive role and work with China to maintain the political and public opinion foundations for China-US relations.

Li made the remarks while meeting with a US congress delegation, led by US senator Steve Daines.

Li said China-US ties had gone through a tortuous journey since the establishment of diplomatic ties, and had been moving forward.

"The two economies are highly complementary to each other and their cooperation has been continuously expanding," Li said, adding that friction and differences were inevitable.

"Some age-old trade issues cannot be settled overnight," the Chinese premier added. "To launch a trade war could never solve problems, and runs counter to the fundamental principles of trade."

"China will work towards a solution through dialogue and consultation, and is also fully prepared with counter measures," Li said.

He called on the US side to meet China halfway, which will help to maintain multilateral trade rules and is good for both countries and the whole world.

Steve Daines and senators Charles Grassley, Ron Johnson, David Perdue and Ben Sasse called US-China ties one of the most important bilateral relations in the world, adding that there was no reason for both countries to have conflict.

They said the US Congress was ready to help resolve bilateral trade friction in a mutually beneficial way.

Later in the day, Wang Chen, vice chairperson of the Standing Committee of the National People's Congress (NPC) presided over talks between the NPC and the delegation, and both sides exchanged views on parliamentary exchanges and other issues.