Madrid (People's Daily) - According to official Spanish statistics, more than 8,000 Chinese students arrived in Spain to pursue higher education in 2016, a tenfold increase over the past decade. In the academic year 2014-15, students from China became the second largest group of international students in Spain.

As Spain is becoming a popular destination for Chinese students to study abroad,  it's also causing controversy. 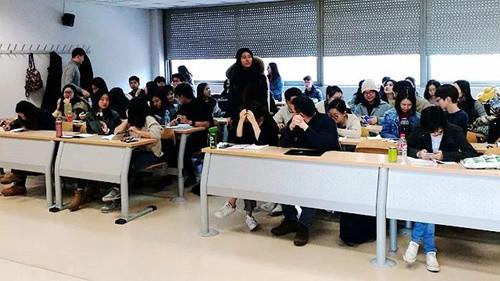 For example, at Complutense University of Madrid, of the 120 spots offered by programs for a masters in journalism, 102 are occupied by students from China, and there are only 15 Spanish students. Most non-Chinese students complain about unchallenging classes and a low level of language proficiency of Asian students.

"We feel deceived and disillusioned. The level is shameful. It is supposed to be a doctorate-focused master's degree. However, during classes, Chinese students barely express their opinions and the professor often has to take breaks to explain some jokes or content related to Spanish culture. Most classes are turned into a Spanish class that summarizes basic Spanish culture and journalism notions for them,” said Carlos Rubio, a student of the program.

The Spaniards who protest want to make it clear that it is about being xenophobic. "I feel obliged to expose it so that whoever is thinking about doing this masters next year knows the truth and won’t waste their time or money. We do not care if they are Chinese, Russian or Italian, but they need to have a good level of Spanish," said Ana Garcia.

Professors who defend Chinese students, like Joaquín Aguirre, argue that they are very disciplined and hard working. They find it difficult to participate "only at the beginning” because of cultural differences.

Aguirre added there are several Chinese students who are doing a PhD. Many of them have an excellent level of Spanish and there is no special treatment for them.

The Complutense recruited 2,045 Chinese students last year. To apply for this masters degree, it is necessary to have a bachelor's degree and at least a certificate of level B2 in Spanish, according to website of the university.

However, several professors say the requirements are not respected. "Students are accepted with a much lower level, B1, even A2, and the possibility of fraud even exists,” they noted.

Inma González Puy, director of Instituto Cervantes in Beijing, says that she is not aware that forgeries are being made, although she does warn that this possibility exists.

"Years ago we had such problems. We always advise universities not to accept students with a level lower than C1 because it will be a problem for the teachers. It's a very serious mistake,  B2 is insufficient," said Puy.

Meanwhile, the master program coordinator in Complutense, María Jesús Casals, defends their fulfillment of requirements and levels of admission. "We have never received a complaint, this year or in previous years, and we don't lower our entry requirements. Although not everyone has the same level at first, some of them will become the brightest. ”