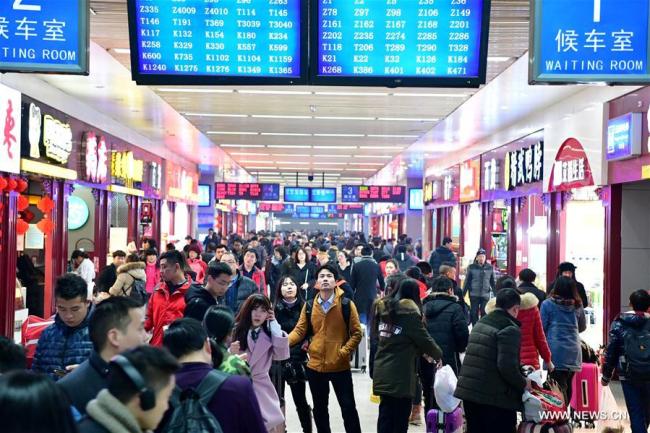 Chinese traffic authorities preparing for the annual travel rush, with hundreds-of-millions of people getting ready to head home for the Spring Festival.

This year's Chunyun, the Lunar New Year travel rush, is officially underway as of this Thursday.

Nearly 3 billion passenger trips are expected to be made, with authorities saying the overall figures will be virtually flat this year.

If the analysis bares out, this would be the first time in years that travel volumes during the Spring Festival didn't rise.

Still, authorities have still been working hard to try to ensure smooth travelling during the holiday.

Lian Weiliang, Deputy director of the National Development and Reform Commission says despite a series of new rail routes being put into operation over the past year, transport departments across China are still going to be stretched to the max, particularly in the days leading upto the Lunar New Year.

"The railway department has planned and arranged 3,819 pairs of railway trains and will increase the number of temporary trains as much as possible. It is estimated that the passenger capacity on the railways will increase by 5.2 percent and 5.3 percent before and after Spring Festival year-on-year. The civil aviation department will guarantee nearly 15,000 flights per day. The highway department has arranged a total of 840,000 passenger vehicles, with around 21 million seats provided."

The official notes more than 200-thousand young volunteers have also been mobilized.

Train tickets to some of the most popular destinations sold out within minutes this year, meaning many will once-again have to try their luck in a few days when more tickets become available.

Road safety is also a major concern for traffic authorities.

"During the Spring Festival, there will be an increase of travel and a big surge of passengers, logistics and traffic flows. And at the same time, we are going to stay on high alert if bad weather hits, including low temperatures, sleet, snow and frost which may trigger traffic accidents. The State Council Work Safety Commission have already made arrangements."

China's transport system is often put to the test during the annual travel rush around the Spring Festival, which is described as the largest annual human migration.

The "Year of the Dog" will officially begin this year on February 15th.