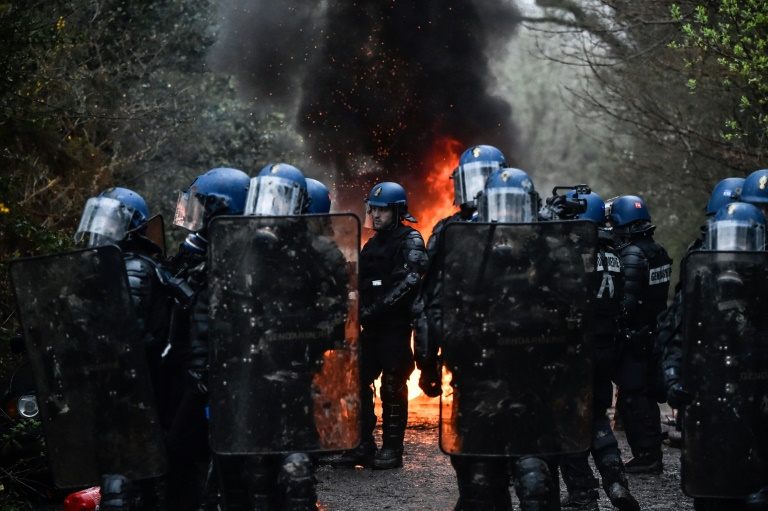 Some 2,500 French police were deployed to raze a protest camp set up at Notre-Dame-des-Landes, near the western city of Nantes (Photo: AFP)

French anti-capitalist activists clashed with riot police at burning barricades Monday during a huge security operation to clear a rural protest camp at the site of an abandoned airport project.

Some 2,500 police were deployed to raze the decade-old camp at Notre-Dame-des-Landes, near the western city of Nantes, and evict the last of the protesters who had refused to leave despite the government agreeing to ditch the proposed airport.

The activists used tractors and burning barricades of tyres, wooden pallets, hay bales and electricity poles to try to keep the police at bay.

AFP pictures showed flames and plumes of black smoke rising into the air as columns of helmeted officers with gas masks and shields clashed with hooded activists.

The police fired tear gas to disperse dozens of protesters who threw petrol bombs, rocks and flares, injuring one officer in the eye, according to the interior ministry.

In January, the government jettisoned plans for an airport at Notre-Dames-des-Landes that had divided the local community for nearly half a century, and told the protesters to clear off the farmland by spring.

But some of the motley group of eco-warriors, anti-capitalists and farmers who had turned the 1,600-hectare (4,000-acre) site into a utopian experiment in autonomous living had demanded the right to stay put.

The government said the main aim of the operation was to retake control of a key road that had been blocked for five years and evict around 100 "of the most radical" squatters from a total of around 250.

In a statement, the protesters expressed anger over the destruction of their huts and shelters, vowing "We will not leave"

By mid-morning some 10 shelters had been demolished out of a target of around 40, along with a watchtower erected by the activists to guard their terrain, regional security official Nicole Klein told reporters.

Six people living in one of the shelters were evicted, she said, adding that they had refused an offer to be rehoused.

The activists moved onto the site in 2008 and have since built up a community they bill as a model of sustainable farming and political debate that they have tried to replicate in other parts of France.

The government had said they could remain on the land if they came up with new, individual farming schemes but most refused, saying they want to run the site collectively and be able to pursue non-agricultural projects.

One of the activists, who gave her name only as Camille, voiced anger over the operation.

"It's unacceptable that the government is chasing people from their homes," she said.

Interior Minister Gerard Collomb said the police would remain on site "as long as is necessary" to prevent those forced out from returning.

The scale of the police deployment compared to the number of protesters reflects the government's determination after a first attempt to clear the site in 2012 ended in failure.

Within months of taking office President Emmanuel Macron decided in January to try to end the standoff by pulling the plug on the airport after years of state dithering.

Supporters had argued that it would boost the local economy but environmentalists countered that the area had unique flora and fauna and that a new facility costing 730 million euros ($890 million) was unnecessary given relatively light traffic at the existing Nantes airport.