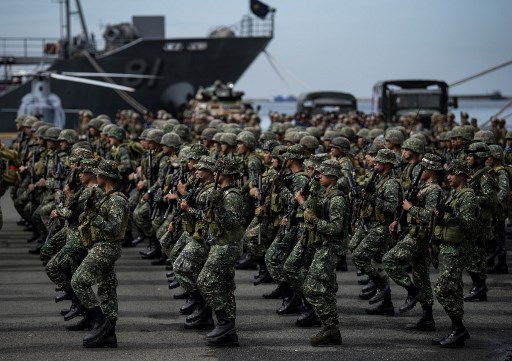 Philippine soldiers march as they arrive at the port of Manila on October 30, 2017, with some 500 personnel composed of marines, sailors, aviators and intelligence operative after a five-month deployment against Islamic State supporters in Marawi City. Photo: AFP

Months after being routed from the southern Philippine city of Marawi, jihadists are waging a fresh and deadly bid to set up a Southeast Asian caliphate in the same region, the military warned Friday.

The gunmen have mustered a force of about 200 and fought a series of skirmishes with the security forces this year after government forces retook Marawi last October, Colonel Romeo Brawner told AFP.

"They have not abandoned their objective to create a caliphate in Southeast Asia," said Brawner, a senior commander for a military task force that has since been protecting Marawi.

"Mindanao is the most fertile ground," he said, referring to the Philippine's southern region. "Our countrymen are more vulnerable (to recruitment)."

Struggling with widespread poverty and armed Muslim insurgencies seeking independence or self-rule, Mindanao must improve poor supervision of Islamic schools or madrasas where most young gunmen are recruited, he added.

He said the armed forces were retooling to meet the challenge of the Maute group, which occupied Marawi over five months and has pledged allegiance to Islamic State group.

Gunmen who escaped during the early days of the US-backed operation to recapture Marawi are leading the recruitment effort, flush with cash, guns and jewellery looted from the city's banks and private homes, Brawner said.

The recruits are mostly locals, but an unspecified number of Indonesians, some with bomb-making skills, have recently arrived there, he said.

- 'Ready for another Marawi' -

The military also reported skirmishes with Maute gunmen in the towns of Masiu and Pagayawan near Marawi last month.

The renewed fighting came after Philippine President Rodrigo Duterte and other political leaders in the Mindanao region warned of a potential repeat of the siege of Marawi which claimed more than 1,100 lives.

Duterte has imposed martial law over Mindanao until the end of the year in an effort to curb the militants' activities.

Ebrahim Murad, head of the Philippines' main Muslim rebel group the Moro Islamic Liberation Front, which signed a peace treaty with Manila in 2014, also warned Tuesday that jihadists were recruiting and could seize another city.

At the same time IS gunmen were making their way into the southern Philippines from Malaysia and Indonesia, he added, but gave no estimates.

Speaking separately to reporters Friday, Brawner said the rebuilt Maute forces currently "do not as yet have the capability to launch another attack like what they did in Marawi", though he added this could change.

The siege of Marawi forced the Philippine military, more used to low-intensity jungle warfare against guerrillas, to reorganise and to rewrite their doctrines, with a new emphasis on urban warfare training, he said.

"So (on) the side of the armed forces we are ready for another Marawi siege, whether it happens in Marawi or elsewhere," Brawner said.