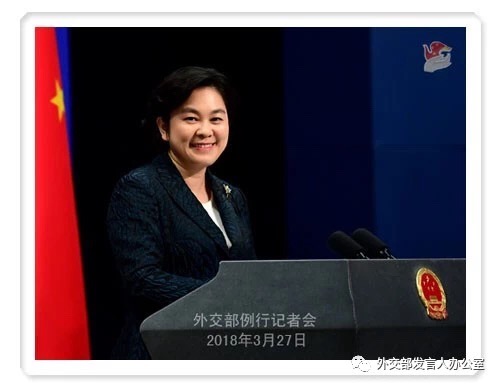 Foreign Ministry spokesperson Hua Chunying said Tuesday that all countries should abandon the cold war mentality and confrontation, in response to a question on the series of expulsions of Russian diplomats from European countries and the US.

The Skripal case has become increasingly fierce as US President Donald Trump ordered the expulsion of 60 Russian diplomats on March 26. A US official said that the move is to show that the country’s stance aligns with its NATO allies.

Hua said at a regular press conference on Tuesday that China pays close attention to the current situation, and staunchly opposes any action involving chemical weapons. At the same time, China suggests that the UK and Russia handle the issue properly through dialogue on the basis of clarifying the Skripal case.

“Relevant countries should follow international law and the basic principles of international relations, and avoid taking action to intensify the contradiction,” said Hua.

All countries should abandon the cold war mentality and confrontation amid the multiple challenges facing the international community, so as to safeguard peace, stability and serenity in the world and commit to jointly construct a new type of international relationship defined by mutual respect, fairness and justice as well as win-win cooperation, added Hua.