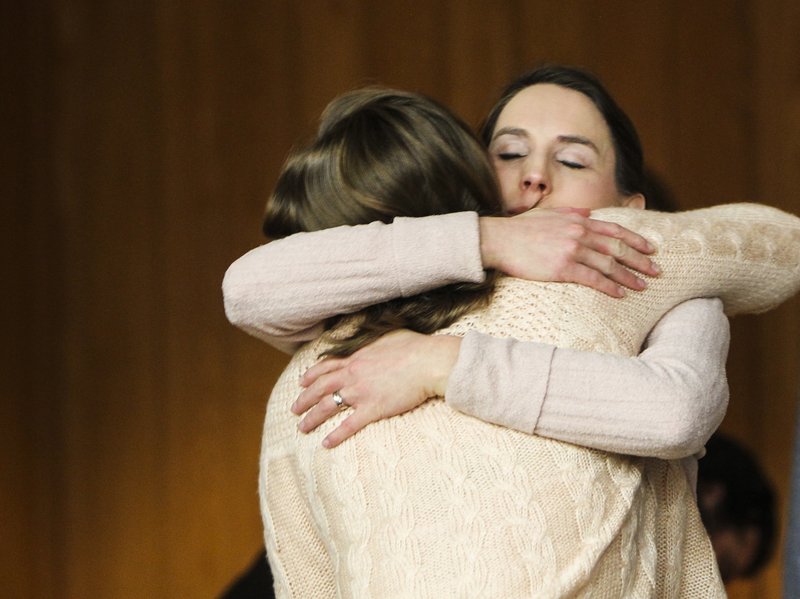 The message for a sport in crisis needed to be sent. One that pushed the narrative surrounding the highest reaches of American gymnastics away from a Michigan courtroom and toward the young women who laid their pain bare for the world to hear. One that stressed to the hundreds of athletes who suffered abuse at the ungloved hands of Larry Nassar that they were not alone.

One that let them know the culture can change from one that allowed the former doctor’s abusive practices to flourish undetected for so long. That it is changing. Not a generation from now. Not five years from now. Not by the 2020 Olympics or even the 2018 NCAA championships.

So UCLA coach Valorie Kondos Field and Oklahoma coach KJ Kindler took their dual meet Sunday and turned it into something far more than a simple meeting of two of the top women’s college gymnastics teams in the country. They wanted to prove a point to a national television audience and packed house at Pauley Pavilion that their sport is not defined by the misdeeds of one man but by the strength of athletes who refuse to be defined by the abuses they suffered.

They handed out teal pom-poms and wristbands in support of more than 260 survivors who have identified themselves as Nassar victims, including Oklahoma sophomore star Maggie Nichols and 2012 Olympic gold medalist and volunteer UCLA assistant coach Jordyn Wieber. They put together a video in which the Bruins and Sooners thanked their teammates and mentors for having the strength to come forward and wore white T-shirts over their leotards emblazoned with “Together We Rise.”

It ended not by honoring Oklahoma’s narrow victory but with Nichols and Wieber joined by Jamie Dantzscher, Jeanette Antolin and Mattie Larson — each a USA Gymnastics team member and former Bruin abused by Nassar — in the middle of the floor accepting a standing ovation that served both as a tribute and a thank you to their courage.

“We wanted this to be a celebration and we didn’t ... want to make this about the courtroom or Larry Nassar because we’re past him,” Kondos Field said. “We’re moving on. Proud and strong and confident.”

It was the most high-profile, but hardly the only public outpouring in the wake of the scandal surrounding Nassar, a longtime team doctor for USA Gymnastics and Michigan State University who has been sentenced to hundreds of years in prison for a variety of crimes, from possession of child pornography to sexual molestation.

College gymnastics meets across the country have become part competition, part rallying cry for change, an insurgency shaped by the unique nature of a sport where most of the American competitors at the elite level are high school students. College programs offer a chance to stay in the sport while developing a life outside it, especially for gymnasts who find themselves in campus environments that naturally foster reflection, conversations around social issues and personal growth.

North Carolina hosted an “Equality” Night in January. At Michigan State, where Nassar worked for decades, the program has found itself trying to be a positive influence at the center of a massive storm far outside of its control.

“I know everyone sees Larry Nassar and they think of Michigan State gymnastics,” said Sydney Ewing, the only recruit to sign with the program in November during the early signing period. “But the girls didn’t do anything wrong. I think supporting them right now is the best thing they need to get through this.”

It’s also the kind of environment that could — emphasis on could — have a trickle up effect on the elite level. Kondos Field has long felt that college gymnastics offers “psychological rehab” for former elite gymnasts who spent their teenage years buried in the gym for 30-plus hours a week, a physical and mental grind that can leave some broken in body or spirit by the time they reach college.

That’s where UCLA’s Katelyn Ohashi found herself when she arrived on campus in 2015. Once one of the top juniors in the country, Ohashi’s senior elite career was derailed by injuries and struggles with body image that followed her to Los Angeles. Ohashi worked under Valeri Liukin at World Olympic Gymnastics Academy and while she never mentioned Liukin specifically by name when discussing her career, she didn’t exactly hold back when talking about Liukin’s decision last week to step down as the women’s national team coordinator at USA Gymnastics.

“I know he’s a lot different with the national team than he was ever with us and that’s something good to see and I think he was doing positive things with it, but I think to really create a different change and change our mentalities of ‘we’re not worth anything if we don’t win medals’ wouldn’t have happened if he was still there,” Ohashi said. “I think it’s a really good thing and something beautiful has like happened from all of this horrible tragedy and I think it’s really good to see.”

Ohashi has bounced back at the collegiate level, where she’s a two-time All-American on beam while becoming increasingly outspoken about the need for the mindset in elite gymnastics to change. The chorus around her is growing.

Nichols played a vital role Nassar’s downfall when she alerted USA Gymnastics officials in the summer of 2015 about Nassar’s methods. Nichols initially remained anonymous before the 2015 world championship gold medalist came forward in January and identified herself as “Athlete A” in legal documents surrounding the case against Nassar.

The raw victim’s impact statement Larson read at one of Nassar’s sentencing hearings crystallized her anger while also reinforcing her belief in change.

“There is another way, a healthy and supportive way to make champions,” Larson said.

If elite gymnastics in the United States wants to fully recover, it doesn’t have much choice. The USA Gymnastics board of directors resigned last month under pressure from the United States Olympic Committee, which also hired an independent firm to launch an investigation. Liukin’s surprise exit has the senior women’s national team in a holding pattern.

As difficult as rebuilding will be, particularly for current elites caught in the middle, the scenes playing out weekly in college gyms from East Lansing, Michigan, to Chapel Hill, North Carolina, to Los Angeles offer hope and tangible proof of what the sport needs to be.

“This is what athletics is supposed to be about,” Kondos Field said. “Not winning at all costs, especially at the cost of the athletes. I feel like we made history.”