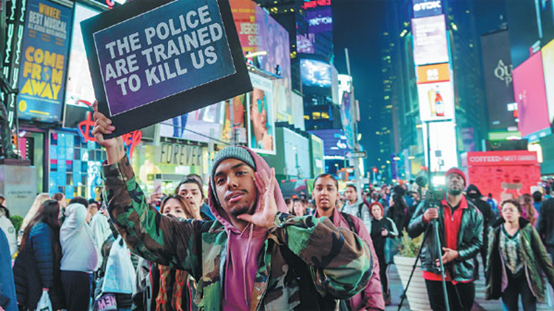 Hundreds of people take to the streets to protest in New York on March 28 over the fatal police shooting of Stephon Clark, an unarmed black man, in Sacramento, California. Police said at least 11 people were detained. (Erik Mcgregor / Pacific Press)

Imagine walking into an eatery and being led out in handcuffs because of the color of your skin. While this scenario might seem farfetched, it actually happened to two black men recently at a Philadelphia Starbucks and it stands as another piece of evidence that the US has a racism problem.

In the last 30 days alone, many protesters and advocates have voiced concerns over an array of incidents that they claim were racially motivated. While the events are extremely different, ranging from murder to vandalism, they all show that a certain level of racism exists in America and still causes certain people to act poorly.

The first instance is the murder of Stephon Clark, a 22-year-old black man who was shot at 20 times by police after they suspected him of vandalizing cars in a Sacramento neighborhood. Clark was unarmed at the time and eight of those shots struck him in his back. He was also standing in his grandmother’s backyard at the time of the incident.

The police used the well-known rhetoric of mistaking a harmless item as a weapon, in Clark’s case it was a cell phone, and shot him while claiming they feared for their lives. This scenario, and the countless similar scenarios that have taken place in the past, begs the question – why don’t police de-escalate these types of situations when a person of color is involved? Also, even if Clark had a weapon, why wasn’t he talked down? Furthermore, the police were responding to an act of vandalism, not murder – so why were they so quick to use lethal force?

It’s easy to label this act as racist when comparing it to the arrest of Nikolas Cruz, the Stoneman Douglas High School shooter, who was taken into police custody without incident. In fact, USA Today reported that the police officers who arrested Cruz calmed him down by telling him “he was going to be fine.”

Why was Cruz given a pat on the back and comforting words while Clark was shot multiple times?

It seems to obtuse that Cruz, who was white and known to have access to guns, was given better treatment than an unarmed black man. It’s a clear case of racism affecting an individual’s reaction to a situation since the officers labeled the black man as dangerous but not the white man – even if it flew in the face of the facts.

Cal Poly San Luis Obispo is seeing some recent media attention after the campus was hit with a string of racist fliers, graffiti, and vandalism not too long after some fraternity members were caught dressing in blackface and other racist costumes. Specifically, the fliers claimed that African-Americans were a sub-species to Caucasians. To fight against the racist views, students and teachers littered the campus with posters defending cultural diversity. However, the posters were slashed, and some saw the act as a threat against minorities.

While most people take racist matters seriously, some Cal Poly SLO students see these racist acts as funny or truth and others seem to want to back up their ideologies with intimidation. This level of racism is stunning, especially since college is typically a time for people to broaden their minds with diversity – not narrow them with racist notions.

What makes matters worse is the fact that such a large community of young people were ok with the racist remarks and did not see that their actions were hurtful or intolerant.

The student did issue an apology for wearing blackface, but according to Cal Poly President Jeffery Armstrong – he will likely not be expelled.

The US has a long way to go to rid itself of its racial divide and it could learn some habits from Canada, which is consistently praised for its progressive views on race and high immigration rates.

However, the only real way to solve American’s racial problems are through accountability. Racist cops, students and others need to have their racist actions singled out as incorrect and they need to be punished for the harm they cause to others. Some of the American people have become numb to the idea of cops killing black people and that there is no justice for people of color. Instead, the US needs to take a stand against these racist acts and show that they will not be tolerated. Because if no one is reprimanded for doing something wrong – others will continue to think its acceptable behavior.