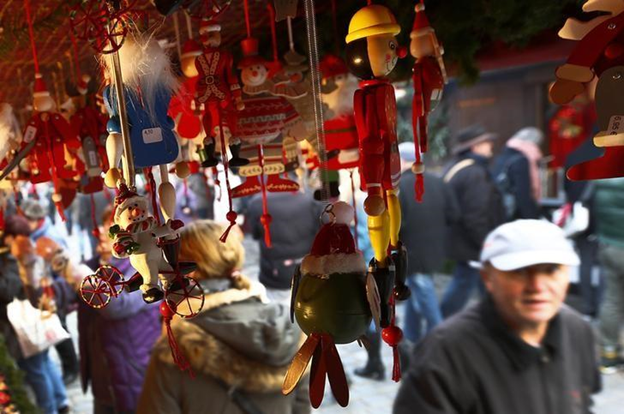 Yes Holly, there is a war on holidays — and Easter is coming! And the soldiers are amassed on the wrong side.  The fight isn’t being waged by real warriors, Holly, or righteous gangsters out for a good fight.

The real war on the soul and substance of “Holiday” is being waged by markets run amuck through a blinding and blinded blitzstreik of hypermedia and a gamut of ghost and gorilla marketeers, for lack of a better word.

Today’s holidays are not a time of serenity and reflection, security and a stab at (genuine) socialization.  Today’s holidays are a prepackaged, freeze-dried spit load of a-whole-lot-of not-a-lot and drivel that hawk trusts and traditions as “stuff” and lines of product.

The thing is this manic-repressive, money-powered and bizarrely gratifying obsession seems diametrically opposed to sensibility and common sense. Can shop-till-you-drop binging be less at odds with the spirit of Christmas—or any holiday, for that matter?  What does Black Friday have to do with Thanksgiving, anyway?

Consumerism has led to the wringing out of much of the US’ culture from its festivities, which in turn turned the US into a Goliath of debt.

If you have a single dollar today, but are debt-free, you have a greater net worth than one out of every five Americans.  Sure, it sounds crazy, but it’s true.

According to recently published reports, US national debt exceeds $21 trillion.  And when we factor in consumer, business, and local and state governments’ debts, America is more than $60 trillion in the red.

US is the wealthiest nation on the planet.  US always has to have more.  Truth is, one can’t incessantly borrow from the future without… destroying it.

Why can’t America roll her doormat at the doorstep of her feet?

Americans should start having slimmer Christmases, and serious Thanksgivings.  What’s wrong with a wistful Memorial Day where emphasis is more on memories, and less on fussy wardrobes and the cheesecake.

It’s not only the US.  As a global society, we are obsessed with needs and necessities and “things” that are never going to make us happy.  Ask any mailman.  Ask the mermaids by the mall.

Perhaps we should all turn off our phones, for a moment—turn over our credit cards… reexamine what it means exactly to observe a holiday.