HEADLINE Confession of corrupt officials criticized for being insincere

Confession of corrupt officials criticized for being insincere 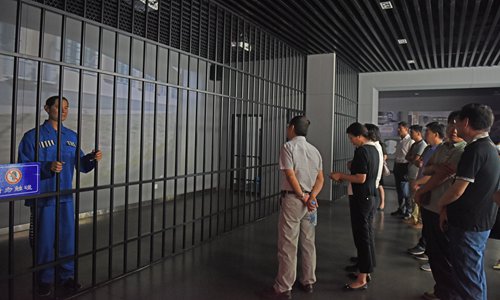 Government officials and Party members look at an effigy behind bars during a visit to an anti-corruption display in Huainan, East China's Anhui Province on September 22. Photo: VCG

As part of China's ongoing anti-corruption campaign, corrupt officials are asked to write confessions about their misdeedsThese confessions can also be used to educate and alert othersWhile many confessions provoke self-reflection and deep thinking among Party members, a few others ring hollow or are riddled with bureaucratic clichesMaking a confession is an important part of the standard process when a corrupt official is busted in China.While some confessions are circulated among Party members for their efficacy of deterrence, some other are poorly presented, insincere or simply lost in bureaucratic translation, the Xinhua Daily Telegraph found.Since the step-up of China's anti-corruption drive following the 18th National Congress of the Communist Party of China (CPC) held in late 2012, at least 148 officials at or above the ministerial level have been detained for corruption. Thousands of low-flying "flies" have also been punished in addition to these high-ranking "tigers."During the 19th CPC National Congress, held in October this year, Xi Jinping, general secretary of the CPC Central Committee, ordered the Party to continue to steadfastly heighten the management of Party members in order to win the war against corruption.Corrupt officials are expected to use the opportunity of being caught to reflect on their misdeeds and correct their thinking. In either written or videotaped form, their confessions also serve as warning to other officials. However, some confessions show nothing but wishful thinking of those corrupt by begging for leniency, Xinhua Daily Telegraph found after sorting through a large number of such confessions.Model confessions, like the ones made by Zhu Mingguo, former chairman of Guangdong Province's political consultative body, and Jin Daoming, former deputy Party chief of Shanxi Province - who were both brought down in 2014 for graft - were included in Always on the Road, an eight-episode anti-corruption documentary.Jointly produced by the CPC Central Commission for Discipline Inspection (CCDI) and the China Central Television, Always on the Road created numerous discussions among Party members and officials across the nation since it was broadcast in October 2016.Following the program's success, many provincial and lower-level Party committees followed suit and produced local publicity materials about officials' confessions in order to educate other officials.Among these confessions, some read hollow, lacking any sincerity or substance, which only further demonstrates the personal, selfish agenda of that particular corrupt official.Lack of sincerityThe most common cliché among these insincere confessions is singing empty praise for the Party while utterly failing to reveal the official's own misdeeds."Looking back on the road I have taken, [I found] every step for me was showered in the sunshine of the Party. I am grateful for everything. My dear Party, I have wasted the Party's expectations, ruined the Party organization's image and violated Party discipline and the law," reads one insincere confession written by a fallen senior official in a central province."Wherever I go, the Party will always be the Red Sun in my heart and shine on me until the end of my life," the official goes on to say in another verse. "My dearest Party! Every creek was formed in the mountains and every tree originates from the root. I came from the people, now I wish to return to the people!"Another common feature of substandard confessions is to look for excuses while remaining wholly unapologetic about their misdeeds. Some officials blame deviant social norms or "hidden rules" that they claim brought them down, or simply attribute their wrongdoings to friends and colleagues.One bureau chief in Ningbo, Zhejiang Province, said that contracting with some "bad friends" was a major reason for his downfall. He said he used poor judgment when making friends, who eventually led him to a dead end.The same chief continued to say that, in his official capacity, he was given many chances to visit Western countries, and that during these visits he had browsed adult websites, participated in online chats about adult subjects and experienced Western sex culture, which all lead him to becoming "highly envious of their lifestyle."Other officials choose to highlight their accomplishments and underline their contributions in certain fields, or stress that they came from a "humble background," which they hope will exempt them from taking any self-responsibility.One department-level official in a geographic surveying department wrote, "I led a backward region to a leading position nationwide in the field of surveying and mapping, which has been witnessing double-digit growth every year, boosting employees' income and the work performance of attached institutes, all which lead me to feeling unbalanced." 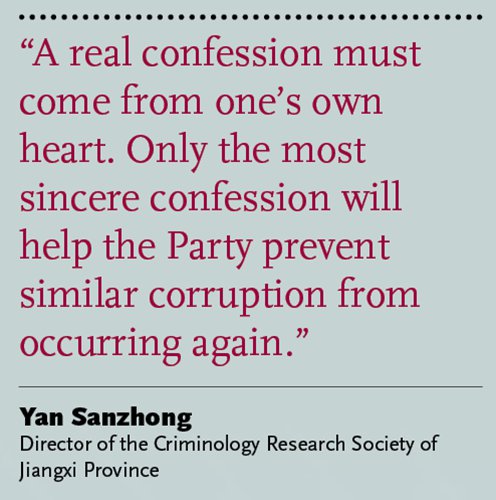 Spoon-fed officialsEach of the above examples lack any sincerity or self-examination, Xinhua Daily Telegraph wrote, which begs the question: Why are so many corrupt officials unable to properly confess their misdeeds?One discipline inspection officer revealed that, during the investigation of problematic officials, they are ordered to re-learn the Party constitution and disciplines, and then apply the Communist ideals to reflect on themselves while writing their confession.However, the report says that some officials have been immersed in bureaucracy for so long that they either cannot separate themselves from sounding like a form-letter or have become dependent on their secretaries to spoon-feed them what to say.Some admit that they have become "relaxed" about their world and life views, lack knowledge of the law or have not pushed themselves to learn and follow the Party organization.Even if these parts of their confessions are true, many corrupt officials do not bother to write a single specific reason why they became corrupt or decided to abuse their positions of power.One investigator said that in order to make themselves look good, officials who are under investigation often write extensively about how diligent and frugal they have been while in office.One former head of a university construction department, who was busted for corruption, spent nearly one-third of his more than 1,000-character confession to introduce how hard he worked and how often he refused bribes and banquet invitations.Another disciplinary official, after analyzing this phenomenon, explained that officials who get caught with their hand in the cookie jar are over-eager about defending themselves in the desperate hope of gaining leniency, all the while failing to understand the real purpose of writing a confession.The seventh session of the 18th CCDI requested to publicize officials' confessions to serve as a deterrent to other officials who might possibly be considering corruption.Shallow and soulless However, Xinhua Daily Telegraph found that this "homogenization" of confessions has reduced their efficacy. Experts agree, saying that confessions as educational materials must show genuine sincerity and depth in order for them to work."Printed and multimedia confessions are very important educational materials. But if the content and attitude of the confessions ring shallow or bureaucratic, they won't hold any compelling power over Party members and thus will lose their potency," one anonymous discipline official said.The Xinhua report goes on to say that some "two-faced" officials are clearly putting on an act, and even when facing punishment or are already behind bars they can't for one second admit that they were wrong."These types of soulless officials only make people feel duped and disgusted," said Yan Sanzhong, director of the Criminology Research Society of Jiangxi Province. "A real confession must come from one's own heart. Only the most sincere confession will help the Party prevent similar corruption from occurring again," he said.