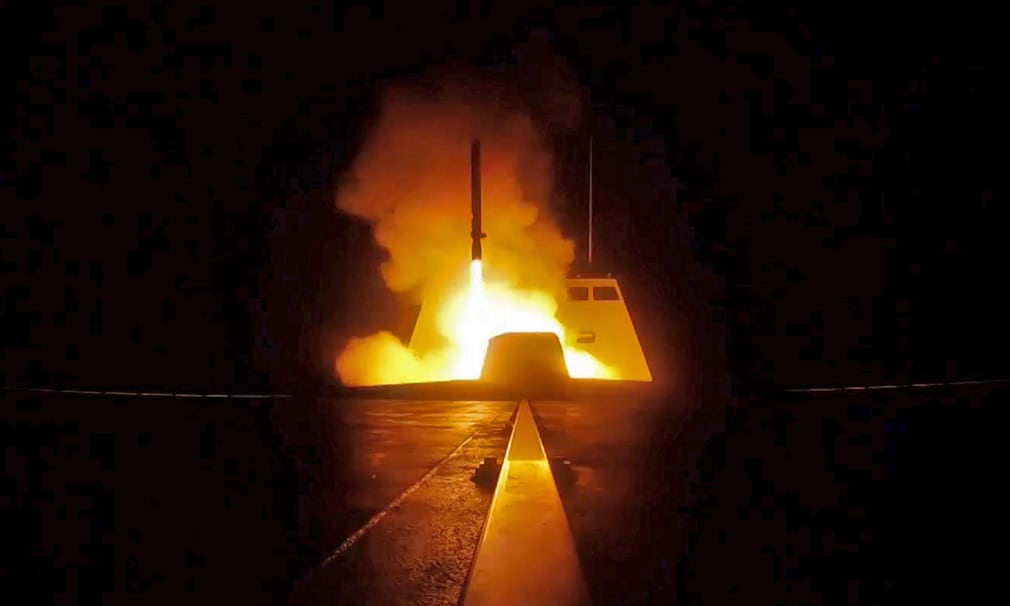 A cruise missile is launched from a French navy ship in the Mediterranean (Photo: AFP)

Huge explosions were heard reverberating across the capital Damascus in the wee hours of Saturday morning. Over three fires were spotted along the north side of Maza Street in central Damascus. Military facilities in Aleppo and Homs were attacked, according to local media.

Hours after the strikes, Damascus calmed down and hundreds of citizens were seen hanging national flags on their windows to denounce the attack and uphold state sovereignty.

Warplanes and ships of the US and its allies launched over 110 cruise missiles and air-to-surface missiles, while the“significant number” of which were intercepted by Syrian air defense systems, the Russian Defense Ministry said.

None of the rockets had hit areas covered by Russia's air defenses around its Hmeimim air base and naval facility in Tartus, according to local media, noting Russian air defense units were not involved in repelling the attack.

In announcing the strikes, Prime Minister Theresa May stated that there was "no practicable alternative to the use of force" to deal with the Syrian government's use of chemical weapons. “It is not about regime change. It is about a limited and targeted strike that does not further escalate tensions in the region and that does everything possible to prevent civilian casualties”, she said.

French President Emmanuel Macron said in a statement that France's "red line has been crossed" by Syria. He said that the Syrian government "no doubt" carried out the attack, and described the strikes as stopping Syria's chemical weapons production.

Russia called the strikes an “act of aggression”, describing it as “unacceptable and lawless”. In a statement released by the Kremlin, Russian President Vladimir Putin said the strike would “have a destructive effect on the entire system of international relations”.

Mixed reactions from the Middle East

Syria, Iran and Lebanon lashed out at the joint strikes.

Syrian state media called the attack a "flagrant violation of international law". President Bashar al-Assad said the attack would only increase Syria’s resolve to “fight and crush terrorism in every inch of the country”.

His Iranian counterpart Hassan Rouhani Rouhani told Assad that Iran would continue to stand by Syria. “Today’s dawn attack on Syria is a crime. I clearly declare that the president of the United States, the president of France and the British prime minister are criminals,” Iran's Supreme Leader Ayatollah Ali Khamenei said, as “there is no proof of Syrian responsibility in the chemical attack on Douma, and  the US could not wait for an Organisation for Prohibition of Chemical Weapons investigation.”

Lebanese President Michel Aoun condemned the attack for “not contributing to a political solution” in Syria, and “impedes all ongoing attempts to end the suffering of the Syrian people,” Aoun said, warning that the strikes would further entangle world powers in Syria’s civil war. 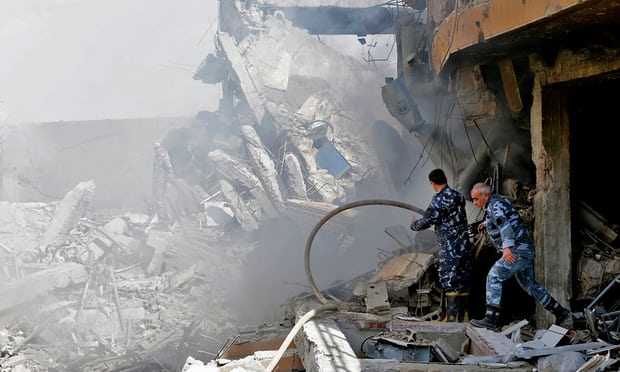 Syrian soldiers inspect the wreckage of a building described as part of the Scientific Studies and Research Centre compound in the Barzeh district, north of Damascus. (Photo: AFP)

At the same time, Saudi Arabia and Qatar vowed support for the attacks.

Saudi Arabia welcomed the strikes on Saturday, while other countries called for a long-term political solution to the country's war. "Saudi Arabia fully supports the strikes because they represent a response to the regime's crimes," said the Saudi foreigh Affairs Ministry.

Qatar also announced its support, saying the situation in Syria demanded "that the international community take immediate measures to protect the Syrian people and disarm the regime of internationally prohibited arms.

In an exclusive interview with People's Daily, Syrian political analyst Abdur Rahim said the US staging joint strikes without any investigations from  the international chemical weapons watchdog on the suspected chemical attack last week is “illegal and illogical”.

“Saudi Arabia's and Qatar's favorable attitude towards the strikes reflects the fierce and complex geopolitics in the region”, Rahim added.

Dilemma behind the “chemical weapons”

A total of 153,140 people, including 58,000 opposition activists and their families, have been evacuated from Syria’s Eastern Ghouta with the assistance of the Russian reconciliation center for Syria since the introduction of humanitarian pauses in late February, the center said.

However, the suspected chemical weapons attack in Douma is believed to have killed 43 people last week and injured over 500, who exhibited symptoms of exposure to a chemical agent, the World Health Organization said.

Based on the symptoms and the speed with which the victims were affected, medical workers and experts suggested that either a combination of chlorine with another gas or a nerve agent was used.

The Russian foreign Ministry on April 8 denied any toxic weapons use, denouncing the reports as another example of a "continuous series of fake news about the use of chlorine and other chemical agents by government forces".

The Syrian state-owned news agency said the claim was an unconvincing stereotype.

The World health Organization has demanded unhindered access to the area to “provide care to those affected, to assess the health impact, and to deliver a comprehensive public health response”, said Dr. Peter Salama, WHO Deputy Director- General for Emergency Preparedness and Response.

An emergency meeting was called by the UN days after to discuss an international investigation on the alleged toxic attack, but failed to adopt any resolution.

The first draft penned by the United States – which would have established a new investigative mechanism for one year, as well as identify those responsible for the use of chemical weapons—was vetoed by Russia.

Similarly, a competing draft – penned by Russia – which would have established the mechanism for one year as well but would have given the Security Council the responsibility to assign accountability for the use of chemical weapons in Syria, was also not adopted.

Also present at the meeting, Syria’s ambassador to the United Nations once again denied that Syria was involved in the alleged Douma attack. 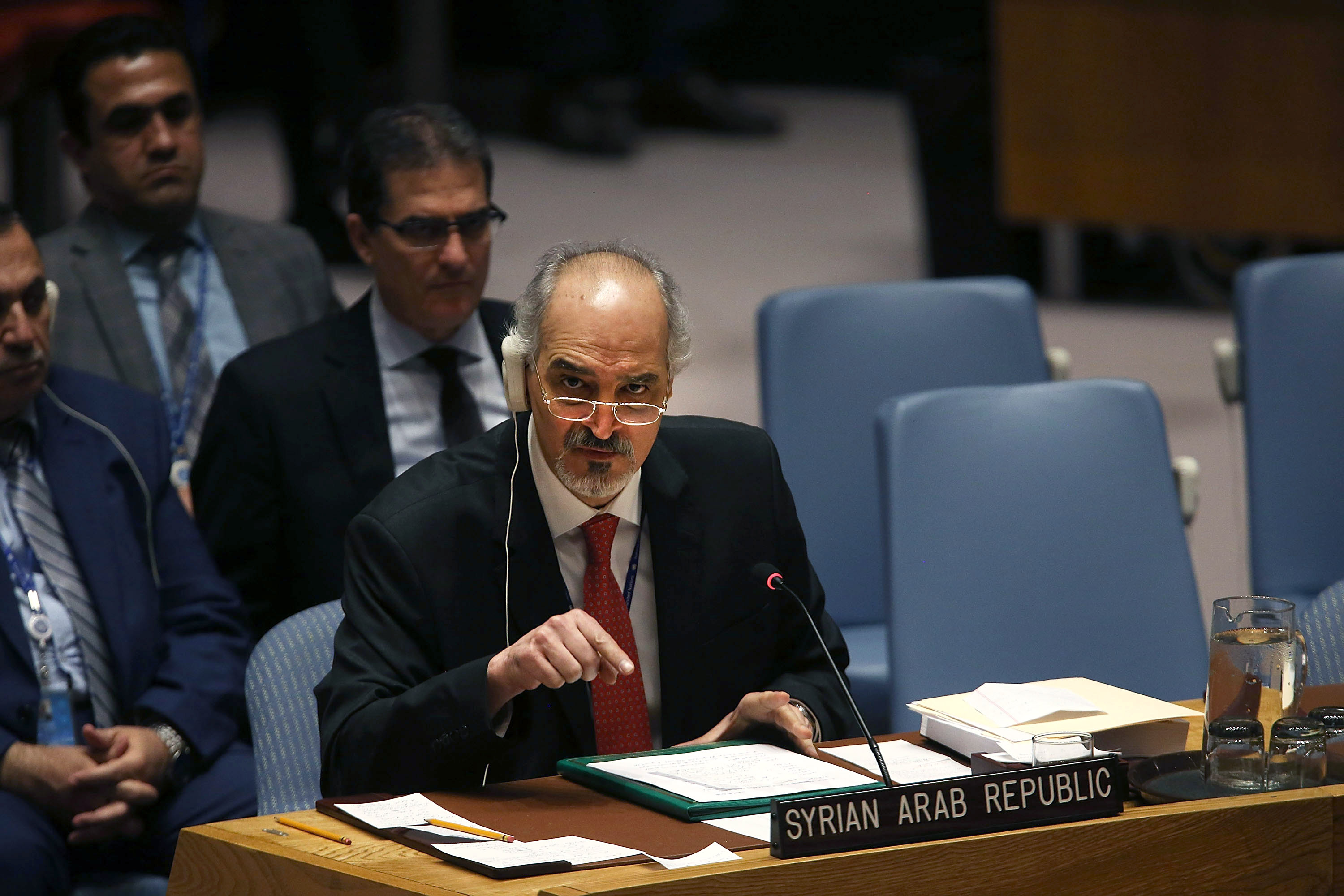 Douma is the last rebel-held town in Eastern Ghouta near the capital Damascus. “The takeover by Syrian government troops over the town has greatly blown the rebel’s momentum”, Syrian political analyst Adnan told People’s Daily.

“So the allegations of a toxic attack at this time was pretty tricky”, Adnan said. “For a long time, the rebels frequently destroyed the rescue operations and put the blame on government forces. Local citizens are used to be forced by unidentified militants to pose as the victims of chemical weapons attacks in front of the camera.”

Trump’s attitude on the Syrian issue has been on a roller-coaster over the past weeks. He has said that he has ordered the US military to deliberate on withdrawing from Syria, and he now exhibits an extremely aggressive attitude towards it.

According to Adnan, it has a close correlation with his strategies in the Middle East. During his presidential campaign, Trump made it clear that US should get away from the cash-burning Middle East as soon as possible. However, the Syria issue is hugely relevant and a number of its allies and agents in this region resolutely refuse to witness the US turning away.

At the same time, there exist a lot of hawks who want to maintain US influence in the Middle East. The US president is not the only decision maker on issues concerning Syria. Trump’s ambitalent attitude is the epitome of the dilemma.

The US-led strikes have complicated the situation in Syria. Both Moscow and Washington refuse to concede on this issue.

“Such extremely targeted military action like the strike yesterday is a wire-act between show‘muscle’and avoiding confrontations”, Adnan said, noting that Gulf countries opposing Assad’s regime and domestic rebels in Syria will certainly take advantage of this chance to continue fuzzing up on this issue.