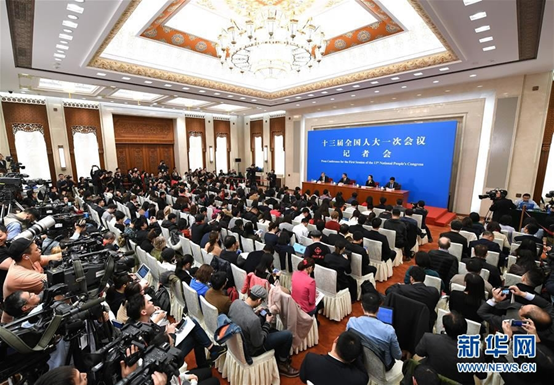 The constitutional amendment adopted by China's national legislature Sunday, including a revision regarding the President's term of office, is good for China's enduring peace and stability, an official said.

Shen Chunyao, chairman of the Commission for Legislative Affairs of the National People's Congress Standing Committee, said the revision is good for upholding the authority and centralized, unified leadership of the Communist Party of China (CPC) Central Committee with Comrade Xi Jinping at the core.

"It is a key measure to improve the state leadership system," Shen told reporters at a press conference held right after the amendment was adopted.

He said the experience of the past 20 plus years showed that the "three in one" leadership system was a successful, effective and pivotal one for China. The "three" refers to general secretary of the CPC Central Committee, the chairman of the Central Military Commission and the state president - the top positions of the ruling party, the armed forces and the state.

Shen said there has been a growing and across-the-board call for the provision of the president's term in the Constitution to be compatible with that of the other two top positions.

"The 'three in one' leadership is not only necessary, but proves to be the most suitable system for a big party and country like ours," he said.

"It is a successful experience we draw from the Party's long-term governance," he said, adding that this revision is "very important" and its meanings need to be learnt well and correctly.

Shen said the revision has a wide and solid political, legal and social base. Lawmakers applauded twice when it was introduced at the NPC annual session on March 5 for deliberation.

In response to a reporter's question, he said the hypothesis of a repetition of political turmoil linked to leadership reshuffle is unfounded because the CPC has managed to solve a number of key challenges in its over 90 years' history, including how to ensure the orderly transition of the party and state leaders at all levels.

The path of socialist political advancement with Chinese characteristics the CPC has explored will lead China to an even brighter future, Shen said.