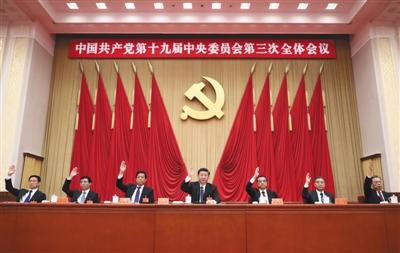 The Communist Party of China (CPC) Central Committee has held a symposium and a consultative meeting to hear opinions and inform non-Communist parties, the All-China Federation of Industry and Commerce (ACFIC) and personages without party affiliations about Party and state institution reform.

President Xi Jinping, also general secretary of the CPC Central Committee and chairman of the Central Military Commission, presided over the symposium and the consultative meeting, which were held on Feb. 6 and Feb. 28, respectively.

Xi made important speeches on both occasions.

Attendees were informed of a decision by the CPC Central Committee on deepening reform of Party and state institutions as well as a plan for the reform.

"Party and state institutions form an important part of the socialist system with Chinese characteristics and a significant guarantee for state governance," Xi said.

Xi stressed the need to improve the Party's leadership over major work, and optimize functions of administrative departments and further streamline administration in deepening reform of Party and state institutions.

He also called for perfecting the distribution of the Party and administration institutions, delegating institutions under the provincial level more autonomy, and managing various institutions and organizations according to the law.

"Deeper reform of Party and state institutions is an important part of implementing the spirit of the 19th CPC National Congress," he said. "It is also a significant task in upholding Party leadership, improving and developing the system of socialism with Chinese characteristics and modernizing China's system and capacity for governance."

National Committee will be important tasks at the two sessions, which is also a big issue concerning the overall situation, Xi said.

The CPC Central Committee has attached great importance to the election, conducted research, and consulted and heard opinions within a certain range, he said.

He said that during the consultation, attendees agreed that the election should be focused on coordinately implementing the "five-sphere integrated plan" and the "four-pronged comprehensive strategy," improving and developing the system of socialism with Chinese characteristics and modernizing China's system and capacity for governance.

The election should also be focused on improving the work of the NPC and the CPPCC National Committee, as well as uniting and pooling various resources, with an emphasis on ability and political integrity when appointing officials, he said, adding that efforts should be made to actively and steadily promote the transition of senior state leaders.

Xi said he hoped non-Communist parties, the ACFIC and personages without party affiliations would unite in thought and action while supporting the CPC Central Committee decisions to deepen reform.

They are encouraged to raise sound suggestions, coordinate relations and gather wide consensus to synergize efforts and create a sound environment for reform.

Deputies and political advisors of non-Communist parties, ACFIC and personages without party affiliations are also encouraged to fulfill their duties and promote positive energy at the two sessions, Xi said.

Leaders of non-Communist parties, the ACFIC and representative of the personages without party affiliations unanimously agreed upon the decision by the CPC Central Committee on deepening reform of Party and state institutions, and voiced their staunch support and raised suggestions.