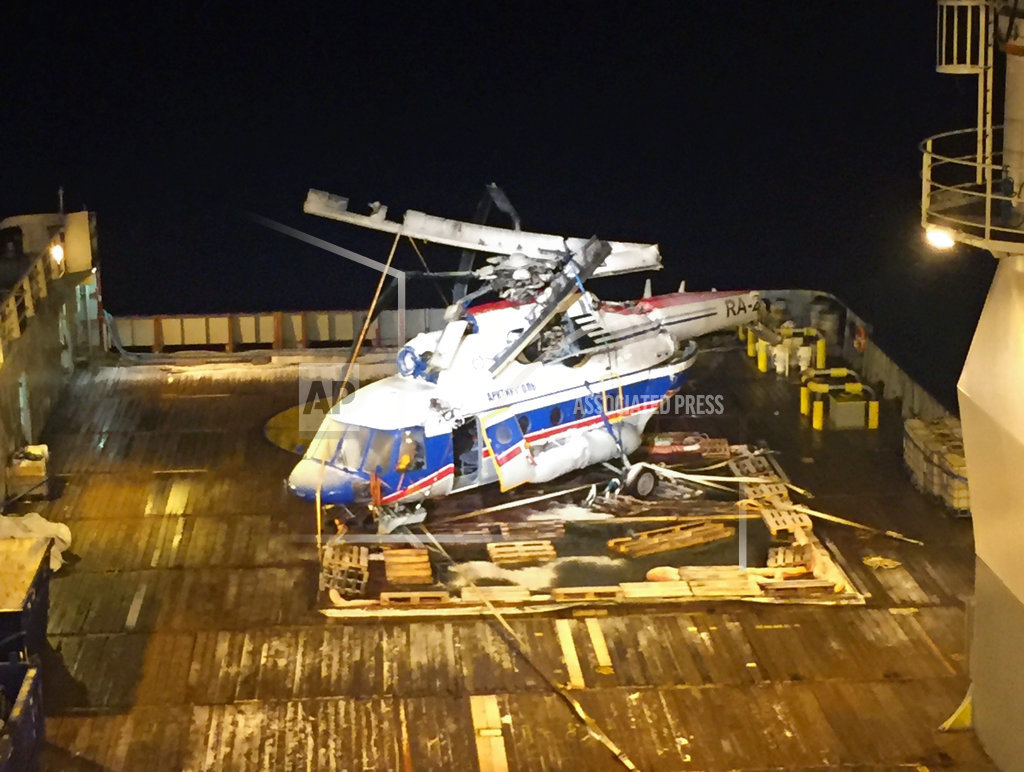 The body, rotor and separated tail of the helicopter MI-8AMT with the registration RA-22312 is lifted up on deck of the ship Maersk Forza, off the coast of Svalbard, Norway, early Saturday, Nov. 4. Photo: The Accident Investigation Board Norway.

A Russian helicopter that crashed off Norway's Arctic Svalbard archipelago with eight people onboard last month was raised Saturday from the seabed.

Norway's Accident Investigation Board says none of the missing people were inside the helicopter that went down Oct. 26 near the Svalbard settlement of Barentsburg. So far, only one body has been recovered from the Mi-8 helicopter's wreckage, which was located at a depth of nearly 210 meters (685 feet).

The agency says the helicopter's cockpit voice recorder was found when the aircraft was brought to the surface early Saturday by a ship equipped with a sturdy crane. It will be sent to Moscow together with the GPS units from the helicopter for analysis.

It said the search continued for the helicopter's flight data recorder, which had not been found, and the missing crew and passengers.

The helicopter had been carrying five crew members and three members from Russia's Arctic and Antarctic Research Institute.

The helicopter went down near Barentsburg, around 2 kilometers (1 mile) east of Cape Heer. It came from the Russian hamlet of Pyramiden, a largely abandoned mine that attracts some tourists on excursions to see the empty Soviet-era buildings.

Barentsburg, the Arctic archipelago's second-largest settlement, is a Russian coal-mining town of about 500 people.

Under an international 1920 treaty, Norway has sovereignty over Svalbard, which is 800 kilometers (500 miles) north of its mainland. Other signatory countries have rights to exploit the archipelago's natural resources, including Russia.

Formerly known as Spitzbergen, the archipelago is known for stunning snow-covered mountains, fjords and glaciers.