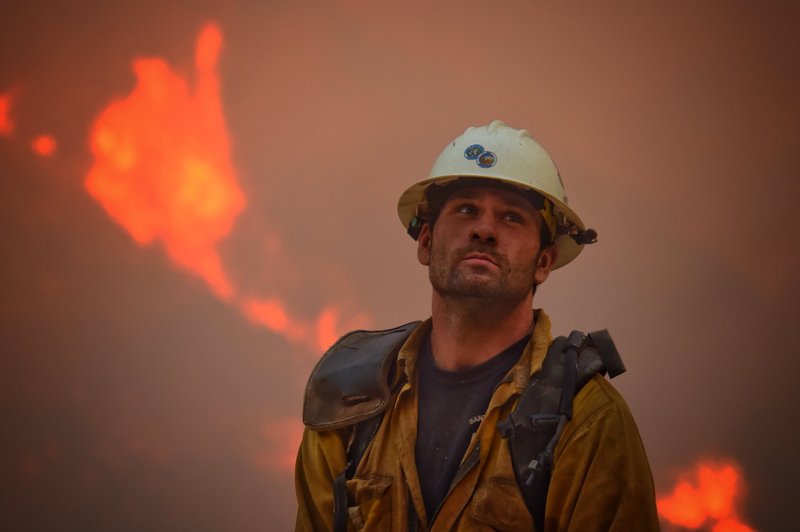 The fifth largest wildfire in California history expanded, ripping through dry brush atop a coastal ridge while crews struggled to keep flames from roaring down into neighborhoods amid fears of renewed winds.

“There were a couple of flare-ups in the hills that put on a light show last night, but they were expected. For now the teams are fighting the fire on their own terms,” he said, adding that shifting winds are always a danger.

Red Flag warnings for fire danger due to Santa Ana winds and a critical lack of moisture were extended into the week instead of expiring Monday afternoon as was initially forecast.

“It doesn’t get much drier than this folks,” the National Weather Service tweeted, adding that more than 80 observation sites in the region reported Monday relative humidity levels between just 1 and 9 percent. 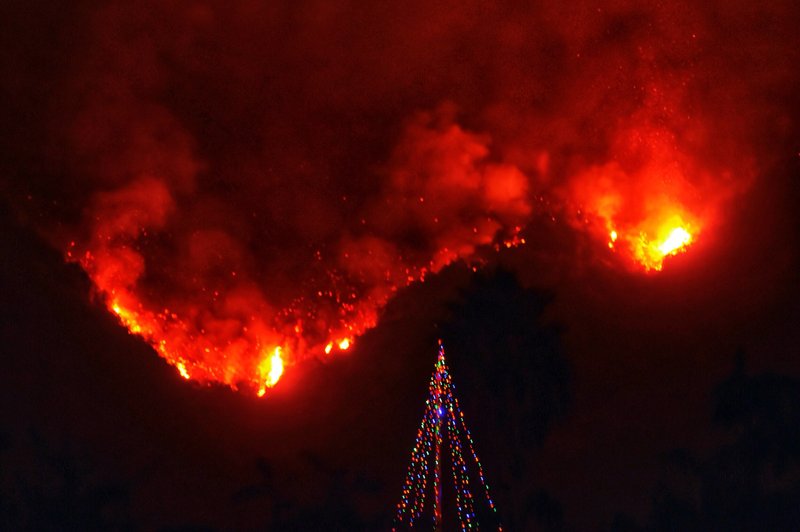 A Christmas tree stands as a lone sentinel in the front yard of an evacuated home in Carpinteria, Calif. Photo: AP/Mike Eliason/Santa Barbara County Fire Department

Tens of thousands of people remain evacuated, including many from the seaside enclaves of Montecito, Summerland and Carpinteria and the inland agricultural town of Fillmore.

Residents near a Carpinteria avocado orchard said the trees could end up saving their homes.

“You have a thick layer of leaves underneath the bottom and they are watered regularly, so it’s like a sponge,” Jeff Dreyer, who lives nearby, told KEYT-TV. “So the fire gets to the sponge full of water and it slows it down. It takes a long time for it to burn.”

Poor air quality kept dozens of schools closed. As ash rained down and smoke blew through streets, regulators urged people to remain inside if possible and avoid strenuous activity.

Officials handed out masks to those who stayed behind in Montecito, an exclusive community about 75 miles (120 kilometers) from Los Angeles that’s home to stars such as Oprah Winfrey, Jeff Bridges and Drew Barrymore. Actor Rob Lowe was among residents who evacuated over the weekend.

The blaze — known as the Thomas Fire — has destroyed more than 680 homes, officials said. It was just partially contained after burning more than 360 square miles (930 square kilometers) of dry brush and timber. The fire has been burning for more than a week.

To the north, San Francisco Bay Area firefighters quickly contained blazes Tuesday that destroyed at least two homes in hills east of Oakland — the site of a 1991 firestorm that killed 25 people.

Santa Ana winds have long contributed to some of the region’s most disastrous wildfires. They blow from the inland toward the Pacific Ocean, speeding up as they squeeze through mountain passes and canyons.

The weather service said that if the long-term forecast holds, there will have been 13 consecutive days of dry offshore flow before it ends Friday afternoon. There have only been 17 longer streaks since 1948, including the record of 24 days set between December 1953 and January 1954.

High fire risk is expected to last into January.