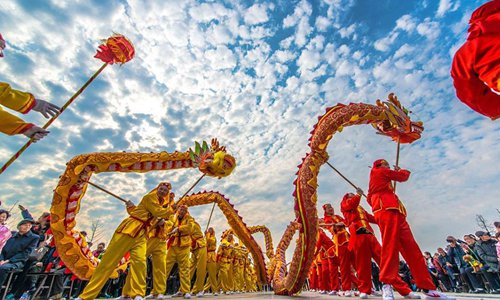 After two days of visiting families and relatives comes the day of rest. According to tradition, people on this day are asked to stay at home after all the hustle and bustle of the previous visiting days. Gifts and visits are usually best avoided, especially in southern China. For in this day it's generally regarded as a bad omen to receive a gift or new year's greetings from neighbors or relatives outdoors.  Traditionally, the third day is known as Chigou's Day. Chigou literally means "red dog," but refers to the God of Blazing Wrath. During millennia of passing down the name, the words got mixed up and evolved instead into chi kou, red mouth. Thus the third day became known as a day to avoid greetings as something bad may come out of your mouth. To avoid quarrels, troubles and other unlucky matters associated with the mouth, many a taboo is enforced to discourage talking. Nowadays Chinese people may still follow the tongue-tied custom, but few know its origins. Another custom connected to this special day can be found in old Chinese folklore: Rat Marriage Day. The rats wed while human beings celebrate the third day of Chinese New Year. This idea is probably linked to the unhappy relationship between ancient Chinese and rodents. China was a nation of agriculture before becoming a modern society. Most people made their living farming. Famine sometimes stalked the land. Chinese know starvation and must always take food seriously. Rats - and mice - have thus always been regarded as vermin for stealing and eating the food stored in granaries. One way to prevent rats stealing is for them to marry. Every year on this third day, people tend to go to bed earlier, leaving enough space and time for rats to finish their wedding ceremonies. Some people even put out rice and money in the house to share with their romantic rodent neighbors.