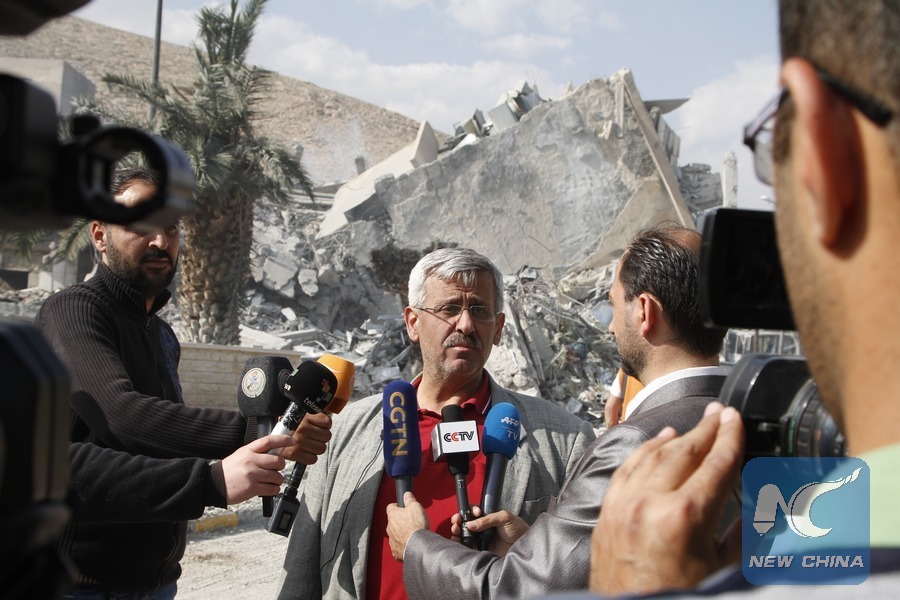 Saeed Saeed, head of the Institute for the Development of Pharmaceutical and Chemical Industries, speaks to reporters at the research center that was hit by the US-led missile attacks in the Barzeh neighborhood in northeast Damascus, Syria on April 14, 2018. (Photo: Xinhua/Monsef Memary)

Damascus (People's Daily) - With the help of Britain and France, US-led forces shelled direct targets in Syria during the early morning hours of April 14. Over 100 Tomahawk long-range cruise missiles hit three targets in the Middle Eastern country causing multiple civilian injuries and nationwide outrage.  Other nations were quick to condemn the US-led attacks that have sparked protests throughout Syrian communities.

People’s Daily visited neighborhoods and communities inside the Syrian capital following Saturday’s attack. Surprisingly, many facilities and businesses were fully operational and practically back to normal. Marketplace destinations such as shops, supermarkets, and mobile phone outlets were open for business just as they normally are on weekends.

Damascus residents hung the Syrian flag in front of their homes or on the streets in a show of support for their government’s bid to protect their nation’s sovereignty while openly protesting the US-led allied missile assault.

Local authorities issued a safety alert warning citizens of further potential airstrikes after the first round subsided. Nevertheless, local residents could still be found outside many neighborhood parks.

Rania, a Damascus resident told People’s Daily it was scary to witness the airstrikes that morning. Her family was unable to sleep, so she took her sons to play in the park because life carries on.

Schools were opened and classes had resumed with upgraded security measures in place, while outdoor activities were reduced to the bare minimum.

One Damascus resident, Khaled (49), said when the missiles first started raining down on the capital, his wife and daughter cried and screamed, fearing for their lives. To remain calm, they drank coffee throughout the strikes.

“US, Britain and France have lost their minds hurting innocent people. They will receive nothing good from it. Syria will not submit to their savage attacks,” Khaled said.

Yusuf, the owner of a water supply station said the US was lying about the existence of chemical weapons in Syria.

“All they need is an excuse to start a war, just like what they did with Iraq.  This was a savage and irresponsible act that the US imposed on other countries. As a permanent member of the United Nations, what they did was in violation of the UN charter and the principles and norms of international law. Their actions must be condemned by international communities,” Yusuf commented.

Syrian media pointed out how the US only wants to gain more interest in the region by applying foreign military pressure on Syria.

“Syria will not let this situation develop at its own pace. Our country will not be tamed by threats from Western nations. The US is lying about a chemical attack launched by the Syrian army. It’s a groundless accusation,” said Yusuf.

The top leaders of the Arms Control Association (ACA), Chair of the Board Thomas Countryman and Executive Director Daryl G. Kimball, issued a joint statement on Saturday that said the ACA is deeply concerned that the latest US, UK, and French military operation was made without US Congressional authorization and support. Therefore, Trump carried military action on his own terms, raising questions over the Constitutionality of such actions.

“The UN Charter prohibits ‘the threat or use of force against the territorial integrity or political independence of any state.’ This section of the UN Charter has three exceptions, none of which apply in this case: Syria has not consented to the strikes; the UN Security Council has not authorized the strikes; and the United States is not acting in self-defense,” according to the ACA statement.

One of the three sites targeted during the airstrikes was the Syrian Scientific Studies and Research Center (SSRC). Saeed Saeed, head of the Institute for the Development of Pharmaceutical and Chemical Industries explained that the US made false statements regarding the alleged storage of military grade chemical weapons inside the center.

“If chemical weapons had been stored here, would I be able to stand safely and talk to journalists?” Saeed asked reporters.