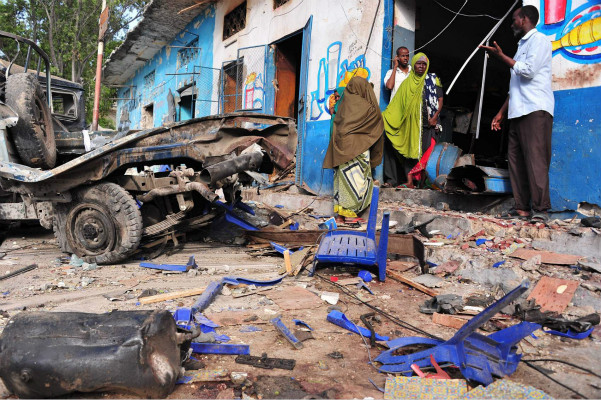 Residents walk at the scene of a blast on October 29, a day after two car bombs exploded in Mogadishu, Somali. Photo: VCG

Johannesburg- A total of five extremist attackers involving a bomb attack at a hotel in Somali capital, Mogadishu, have either been killed or captured on Sunday morning after Somali security forces ended a night-long siege of the hotel controlled by Islamic extremist group al-Shabab.

Somali troops regained control of Nasa-Hablod hotel – which lies about 600 meters from the presidential palace – on Sunday morning. Three attackers died during the fight and two attacker were captured alive, according to Somali captain Mohamed Hussein.

The bomb attack, which killed at least 29 people, including 12 policemen, started Saturday afternoon.

Two truck bombs attacked Mogadishu, one car bomb rammed into the Nasa-Hablod hotel, and the other car bomb exploded near former parliament house. Al-Shabab claimed responsibility for this attack.

It also came two weeks after Somalia’s worst-ever boom attack on a busy Mogadishu street. The deadly attack killed at least 358 people. Another 56 people were still missing. Al-Shabab was widely suspected, but has not claimed responsibility after thousands of Somalis protest on the street.

In 2016, 723 people died in 395 bomb attacks in Somalia, according to a report produced earlier this year by Nairobi-based think tank Sahan Research.